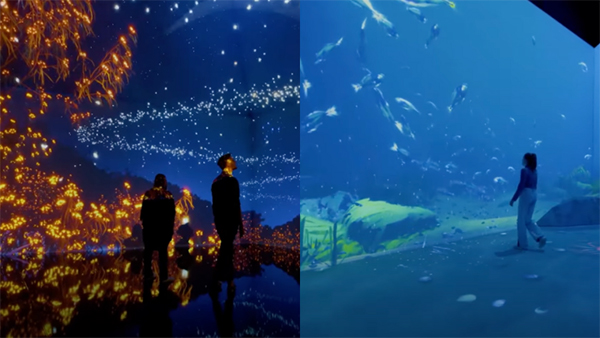 Asha Barbaschow, How This Aussie Exhibition Reignited My Love for Museums, Gizmodo, 14 November 14, 2022

When I was a child, museums were…they were a little stale. Instead of harnessing the curiosity every kid (and adult) possesses, exhibitions were more like slapping a few plaques and pictures on a wall. The high-tech elements, if the museum forked out the cash for them, were a 5-inch-thick touchscreen monitor that had been scratched beyond being usable. Nothing exactly to inspire you.

Recently I visited the Melbourne Museum, where they’ve hosted an exhibition called Tyama. The pitch from the museum is that Tyama is “immersive, multisensory, extraordinary”. The pitch from me, however, is that it somewhat revitalised my love for museums.

As someone who has been involved in tech for a minute, I was genuinely excited to see how the museum is embracing the prospect of technology. But most importantly, how tech isn’t being treated as something that sits behind another thing, processing data and sticking to itself. Instead, it’s enabling a new kind of experience. My nerdy self left feeling good, both about the exhibition and the future of technology in a consumer setting.

While I couldn’t possibly do it justice, I’m going to try.

Tyama (CHAH-MUH) is the Keerray Woorroong language verb ‘to know’. It is about knowing, not just with our minds, but with our whole body. This is sort-of the premise for the whole exhibition, to blend you with the artwork. Upon entering, there’s a space that introduces those that are participating to the world they’re about to enter. There’s brief mention of this space being interactive, but to blatantly tell everyone that’s the case would ruin the experience.

This is where I noticed my movement was activating an action – something that was almost too deliberate to be a coincidence. Then I moved again, and the projected lights followed me. The first ‘space’ confirmed this was the case: I was basically a human joystick.

As I moved, the moth moved, I changed the trajectory of the character’s story.

I saw kids pick up on it much faster than everyone else around me – to be honest, many people were just in awe of the beautiful moving graphics covering the walls.

In another space, I immersed myself within a small school of fish and encouraged them to move away from danger. It became very clear this was a game. A floor-to-ceiling, 360-degree game. One that was bringing to life First Peoples wisdom in way that was complementary, not overbearing.

Of course, I couldn’t just be amazed. I have this obsession with looking at everything through the lens of it being potential content. Intel was kind enough to introduce me to Museums Victoria Technical Project Lead Richard Pilkington to dig a little deeper. As I just gave away, everything I experienced was enabled by Intel. But more on that last part in a minute.

I asked Pilkington firstly what he wanted people to feel when they were moving through Tyama.

“While in there, I want [people] to feel that connection to wonder, that connection to Victoria’s flora and fauna, in a kind of a wonderous way, and I want the tech to demonstrate that feeling of wonder,” he told Gizmodo Australia.

He said, however, it was important that people arent thinking, “Wow, tech is amazing”, rather they’re focusing on how, for example in the first scene, a moth can light up the night’s sky.

“I wanted to still keep in touch with that museum wonderment, where you learn some information, or you learn a different perspective and you go away with a bit of a narrative rather than getting in there and going, ‘oh, wow, look at all of this tech everywhere and isn’t the future cool’,” Pilkington explained.

Upon leaving, the message is pretty on-par with my experience. That leaving sees you experience the outside world in a different way, you observe more and interact more with the space that exists adjacent to you. There’s also the balance between telling the First Peoples’ story in a way that is accurate, and having the tech drive the narrative rather than hinder it.

“Something that comes within museums exhibition spaces – we’re always trying to make the tech disappear and kind of become seamless,” he added. “To tell the story – that has to be forefront, because you don’t want it to get in the way.”

“I think that’s an important thing where you’re using technological innovations to drive your narrative, rather than using them for the sake of them being new,” Pilkington said.

“It’s a real difficult balance because they are so new. People might not necessarily know how to use them. And so it’s about trying to manage that scope of not just being so new that people are confused by what it is that you’re doing, but also not so derivative that it’s the same approach they’ve seen everywhere else.”

I touched on the gamified elements above that saw me witness kids experiencing Tyama in a different way to me. Pilkington and his team thought about this, mapping out the entire space virtually, packing the tech so full of possible outcomes, sort of like a choose-your-own-adventure novel. There isn’t just one way to move through Tyama and everyone’s experience is completely different.

“It is a game space, but it’s a shared game space … with 20 people who are from differing backgrounds and different ages all doing the same interaction at the same moment is quite an interesting thing that I think is quite new and not really done that much,” he added. “It’s going to be interesting to see how that evolves over time.”

Chatting with Pilkington about blending the IRL with the digital, it was inevitable that the concept of the metaverse came up. Unfortunately, it’s been a little tainted since the term gained mainstream attention, thanks mostly to the Mark Zuckerverse, but it was an interesting concept to ponder. To me, the metaverse by definition would see the real blend with the unreal, I’d argue exhibitions like Tyama do a fantastic job of that.

“I think there’s a natural evolution of say, multimedia and filmmaking and gamification and interactives that this metaverse is kind of being built out of, rather than being directed by tech companies,” he added.

“We’re kind of scaling up what we’ve always done with the technological overlay and that is the metaverse.”

Tyama is powered by 20 Intel NUC 9 Extremes and 10 Real Sense D455 cameras. This technology uses sensors to detect guests as they walk through the six-room exhibition and direct the light to interact with them. The Extremes aren’t usually chosen for something that isn’t gaming-level, but due to the heavy graphics and game-like environment Pilkington and the team created, it makes complete sense.

Pilkington told Gizmodo Australia the NUCs were chosen as they small enough to fit in the roof space, but powerful enough to run the custom software created by the Museum’s IT team. He also knew he didn’t have to jump up into the ceiling to fix them multiple times a day. (Side note, the museum also appreciated the price).

If you glance up at the ceiling, you can see them attached to the projectors. It’s not easy, but they’re there. But when you head in to check it out for yourself (please do), don’t look up and ruin the experience. If the future of exhibitions in Australia is what Tyama is hinting at, then it’s a future we can all be proud of knowing our obsession with technology is helping to forge.

Head over here to check out the specifics of the exhibition, I just wanted to share my experience with you all.