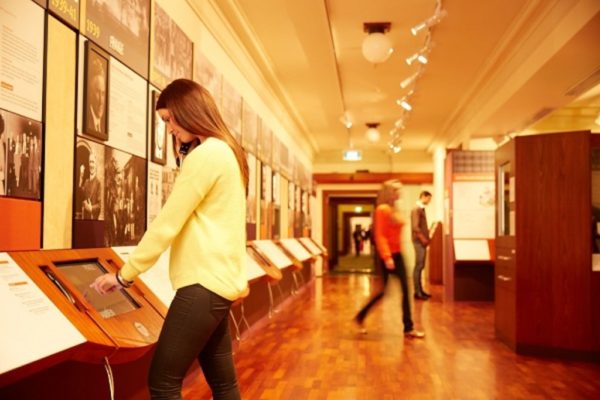 Discovering the personal stories of the nation’s leaders in Prime Ministers of Australia at MoAD. Photo: Swell Design.

Despite a decline in support for democracy, more Australians are engaging with democracy than ever before, according to annual results released today by the Museum of Australian Democracy at Old Parliament House.[1]

Close to 700,000 people engaged with the museum during 2015/16 to learn, discuss and celebrate the spirit of Australian democracy – the highest numbers for the museum on record.

Visitation to the museum at Old Parliament House in Canberra grew for the third consecutive year to over 357,000 people, representing an increase of 97 per cent since the launch of the Museum’s strategic plan in 2013.

Ms Daryl Karp attributes this success to the museum’s focus on bold, timely and relevant content: “We challenge visitors’ perceptions of democracy and of museums by continually delivering something new to see and do that is unexpected, participatory and transformative.”

In addition, over 330,000 engaged with the museum’s online offering and the iconic museum has participated in 17 filming and photography productions, reaching a potential audience of 66 million in Australia and overseas.

Director of the Museum of Australian Democracy Ms Daryl Karp says the increase in visitation shows that the museum’s strategy is working to match the changes in the way Australians engage with democracy.

“Our research has shown that Australians are engaging with democracy in different ways. They are making their voices heard and engaging in political and social debates through more interactive and online mediums.

The Museum of Australian Democracy’s strategy has focused on continuing to offer state-of-the-art experiences at the iconic Old Parliament House, whilst delivering innovative content through digital and social media channels to engage audiences in different ways.

“Free Speech Floats is a great example of how we do things differently. Over four days, 15,000 people participated in the event, leaving 12,000 messages conveying a very broad spectrum of opinions, contemporary issues, beliefs and aspirational visions for our nation,” said Ms Daryl Karp.

During October and November 2015, the Museum of Australian Democracy brought to life the 40th anniversary of the dismissal of the Whitlam Government through a Twitter story to allow readers to step back in time. The highly successful social media event trended on Twitter, engaging audiences with a historic moment in Australian political history.

It also launched primeministers.moadoph.gov.au – the most complete picture of Australian prime ministers, bringing together cultural, community and contemporary resources.

The museum launched 10 exhibitions and delivered 15 public programs in the 2015/16 year. This included the pop up PLAY UP – The Right to Shelter, exhibition delivered in partnership with Better Shelter and the IKEA Foundation.

The popular PLAY UP exhibition, which engages families in democracy through play, was highly commended in the 2016 Museums and Galleries National Awards.

“Our pop up PLAY UP exhibition at Floriade is a perfect example of taking democracy out of the museum and allowing our audiences to explore and discuss aspects of democracy in different ways.”

The Museum of Australian Democracy has increased outreach and travelling programs, with visits of 35,214 to travelling exhibitions – an increase of 66 per cent from the previous year. It has also continued its highly successful schools program.

“Over 81,000 students came through our doors in 2015/16 to learn about, engage with and discuss Australian democracy. The museum has tailored programs to engage students of all ages and it is amazing to see students leaving inspired about their place in a democratic society.”

The popular schools program has welcomed over 600,000 participants from more than 2,000 schools since it began in 2009.

Further information and statistics from the Museum of Australian Democracy’s 2015/16 Annual Report is available from http://moadoph.gov.au/about/annual-reports/