December 19th, 2019 | Browse other: News. | Tagged with: how young Australians understand and imagine their democracy, Museum of Australian Democracy, our democracy is safe in the hands of future voters |

Mark Evans, Gerry Stoker & Max Halupka, Don’t believe the stereotype: these 5 charts show our democracy is safe in the hands of future voters, The Conversation, 16 December 2019

A new, ongoing survey on how young Australians understand and imagine their democracy is already challenging long-held stereotypes.

The survey – conducted for Democracy 2025 – will eventually draw on the 90,000 students and teachers who engage with the Museum of Australian Democracy’s learning program, Ignite.

Here, we capture some key findings from the baseline survey of 857 school visitors, aged 12 to 17, who travelled to the museum from all over Australia this year.

Our findings are optimistic – they challenge the idea that young voters are apathetic, and show that future voters are champions of democracy, committed to changing the direction of Australian politics.

In short, it’s not that young people don’t like politics; rather, they want to do politics differently to older generations and want to see a different agenda of change.

The responses captured in the chart below show two thirds of future voters believe democracy is the best option for the future government of Australia.

Most of the remaining respondents are not sure, and only a small percentage think democracy is not the best option. No respondents answered “definitely not”.

Contrary to the argument there has been a generational decline in support for democracy, these findings suggest that if you look at those approaching voting age, democracy is safe in their hands. 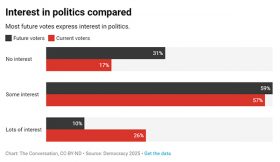 That interest will most likely grow as future voters reach adulthood, not least because there are key issues they feel passionately about.

We also asked future voters to identify the top issues they cared about most. Mental health, bullying, gender equality and climate change were identified as the most important issues, and recognition for Indigenous Australians came fifth.

While future voters we surveyed were wedded to the same core issues, female respondents felt more strongly about each issue. We also found there were greater differences over equal gender rights and Indigenous recognition.

Other issues of concern to older generations, such as job security, cost of living or Australia becoming a republic, were not viewed as pressing. Even age-appropriate issues such as lowering the voting age to 16 years or abolishing university tuition fees didn’t register. 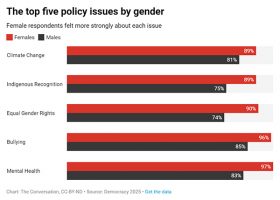 These choices are interesting. Do they tell us about how young Australians view their lives now, and how they see future challenges? Or do they reflect the success of school debates on these issues?

It’s also worth noting these issues are not at the forefront of the core political agenda. Future voters might be about to reshape politics around a small “l” liberal policy agenda.

Where future voters learn about politics

Another question we asked was where future voters get their information about politics. We expected the internet to be top here, but were surprised by the focus on traditional sources such as school, TV, family, friends and the community.

Is the internet seen as a source of entertainment, rather than political engagement? Or is this finding part of the standard story of socialisation, where political understanding is mostly taken from sources closer at hand?

In any case, it’s clear young Australians are informed through mainstream sources and are not captured by internet radicals or fake news.

We also wanted to know if future voters think they are being well prepared for their role as citizens? This involves understanding their rights and responsibilities, their role as voters and their participation options.

There is another positive message to be taken from the chart below, in that it shows almost half of future voters think they are being well prepared for this role.

But it also tells us about half our respondents fall into categories suggesting they’re not sure, or very clearly believe they’re not being prepared for the future.

In school report terms, citizenship education could be given the assessment: “reasonable progress is being made, but must try harder”. We may need to re-ignite the way we teach or talk about politics to future voters.

While we’ve provided only a glimpse of the findings we have generated, there is still considerable food for thought and debate. Not least, we show that far from demonising young Australians, we should consider them the sail of Australian democracy, not the anchor.