August 20th, 2020 | Browse other: News. | Tagged with: COVID-19 and trust in political leaders, Museum of Australian Democracy, Report: Political Trust and the COVID-19 Crisis: Pushing Populism to the Backburner | 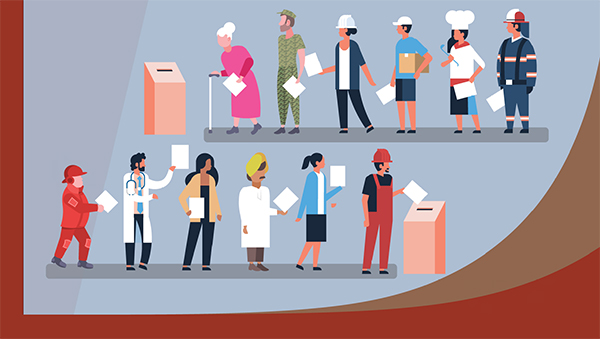 In a new Democracy 2025 report ‘Political Trust and the COVID-19 Crisis: Pushing Populism to the Backburner”, researchers from the Universities of Southampton, Canberra and Oxford find that perceptions of the threat posed by the coronavirus and performance of political leaders tend to correspond to how the crisis has unfolded in each country. 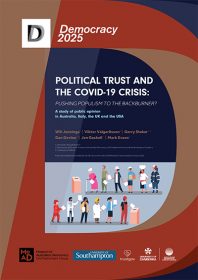 The ESRC-funded TrustGov project and Museum of Australian Democracy teamed up to conduct online national surveys, fielded by pollsters Ipsos MORI in May and June 2020, in Australia, Italy, the UK and the USA.

The surveys reveal that the public’s assessment of the level of threat posed by the coronavirus and trust in government and political leaders tends to correspond to the actual experiences of citizens in the four countries.

The process of judging the competence of political elites in the context of COVID-19 is more than a crude judgment about threat and outcomes. It reflects how the leader is perceived to have managed the process and their relationships with other stakeholders and interests. 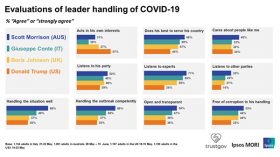 The leaders that are most likely to have been seen to use expert advice, been open and transparent and have been capable of working with others are generally seen to have also handled the outbreak most effectively.  President Trump stands out as receiving the lowest marks from the public. Majorities of the public in Australia, Italy and the UK viewed their leaders as consulting with experts and others in government in their handling of the pandemic, but only a third consider listening to experts to be a feature of Trump’s way of working.

COVID-19 has complicated the global political landscape. But the partisanship and polarisation on which populist politics thrives has not gone away.

Professor Will Jennings, Principal Investigator of the TrustGov project at the University of Southampton said:

“These findings make clear that the public notices and responds to how government is handling the coronavirus crisis – and the threat it poses to us. Competence matters for trust in political leaders, though the presence of deep partisan divides highlights how politics as usual continues even in times of existential crisis.”

Professor Mark Evans, Director of Democracy 2025 at the Museum of Australian Democracy said:

“Public trust as a political resource is particularly important in times of coronavirus. Without it the changes to public behaviour necessary to contain and ultimately prevent the spread of infection are slower and more resource intensive. People need to trust the government to support more government intervention that makes a difference.”

“Populist politics has had a good decade but our survey suggests that in a crisis people value politicians who are competent and deliver more effective management of a real and significant threat. It is possible that the pandemic represents a turning point for democratic politics.”

“Competence is politically sexy again with people being more positive towards those politicians who utilise expert advice. Although the divides on which populism has thrived are still there and haven’t gone away in this latest crisis those politicians who have been consistent, calm and clear have performed best”

Technical note: Ipsos MORI interviewed a nationally representative sample of more than a thousand adults in each of Australia, Italy, the UK and US in May and June 2020. The exact fieldwork dates and sample sizes for each country can be found in the table below.

The full report is available here and on the D2025 website.

The Museum of Australian Democracy celebrates Australia’s proud history as a democratic nation and actively promotes the participation of its citizens in determining its future.

MoAD is a museum not just of objects but of ideas. In our iconic heritage building, we tell the story of Australia’s journey to becoming one of the world’s most vibrant and multicultural democratic nations.

MoAD is a place where stories, conversations and narratives from myriad perspectives can be heard and discussed.
About Democracy 2025

Democracy 2025 is an initiative of MoAD—in partnership with the Institute for Governance and Policy Analysis at the University of Canberra—that is strengthening democratic practice through research, dialogue and innovation. For more information go to www.democracy2025.gov.au.