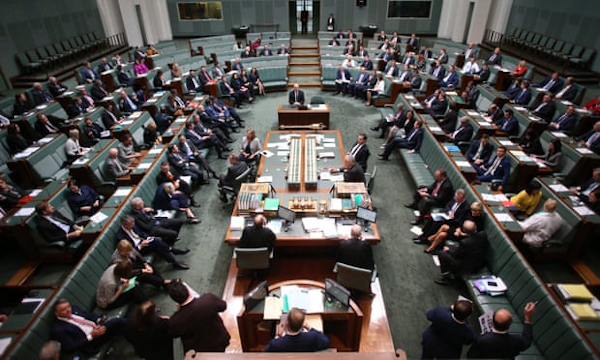 A Democracy2025 survey shows that 61% of politicians are satisfied with Australian democracy compared with 41% of the public. Photograph: Mike Bowers/The Guardian.

Three-quarters of MPs want the caps, with 23% saying misrepresentation by media their greatest dislike.

Three-quarters of federal parliamentarians want caps placed on both donations and election spending to help restore Australians’ trust in the democratic process.

On Wednesday, Democracy2025 will release the results of a survey of 98 out of 226 politicians in the last term of parliament, which shows while most politicians are satisfied with Australian democracy (61%) compared with the public at large (41%), they are still concerned about lack of trust and a growing disconnect with the public.

The initiative of the Museum of Australian Democracy asked the politicians to nominate their greatest dislike about Australian democracy. The most common responses were misrepresentation by the media (23%), integrity issues including corruption (13%) and short-termism and the three-year election cycle (12%).

By comparison the Australian public’s biggest concerns were the poor behaviour of politicians (19%), poor leadership (18%) and adversarial politics (14%).

The politicians nominated Australia’s rates of political participation (34%), free and fair elections (31%) and compulsory voting (21%) as its best features.

The survey also asked politicians to rate a series of proposed reforms to improve democracy. Caps on donations and election spending topped the list with 76% in favour, followed by candidates lodging detailed election pledges (58%) and e-petitions triggering debates in parliament (55%).

No other proposals got majority support, although members having more say in their party leader, allowing dual citizens to run for parliament and more free votes in parliament had more than 40% approval.

Forms of direct democracy – such as postal votes on contentious questions (15%) and citizen juries (14%) – received low support. The least popular solutions were quotas for seats in the Australian parliament based on gender (12%), ethnicity (8%) and age (4%).

The survey was not representative of the 45th federal parliament as a whole, with more female respondents than male and more respondents from Labor (39%) than the Coalition (35%) and crossbench (27%).

The survey did not ask about Indigenous constitutional recognition or an Australian republic, labelling these proposed reforms “highly politicised”.

In a report presenting the results, Democracy2025 director Mark Evans and University of Canberra Institute for Governance and Police Analysis centenary professor Gerry Stoker said that institutions including the Australian public service, parties and parliaments are “failing to various degrees” to drive engagement in the political process.

“Political parties are struggling to deliver the political functions of aggregating and cohering community interests,” the report said. “They have also neglected the role of talking directly to the public.”

The report argued that rather than a “binary choice” between representative democracy and greater public participation “it is increasingly evident” that citizens and politicians think a mix of both will enhance trust.

“On balance [parliamentarians’] preference is not to rush to forms of participatory citizen-centred democracy but instead to adjust and strengthen the way that representative democracy works; to make parties better at performing their three roles in providing community linkages, effective governance and democratic integrity.”

The joint standing committee on electoral matters – which helped design the Democracy2025 survey – is currently conducting a review of the 2019 election.

The review has heard from civil society groups which called for spending caps on elections, citing Clive Palmer’s record $60m expenditure on the election; Coalition MPs who want a shorter pre-poll period; and Labor, which wants social media giants subjected to more scrutiny for failing to take down false material.