You are here: Home » Articles filed under: 'News' » Article: 'MoAD sees what bees can teach us about'

MoAD sees what bees can teach us about

August 6th, 2021 | Browse other: News. | Tagged with: Colony Collapse Disorder, Museum of Australian Democracy, What bees can teach us about democracy | 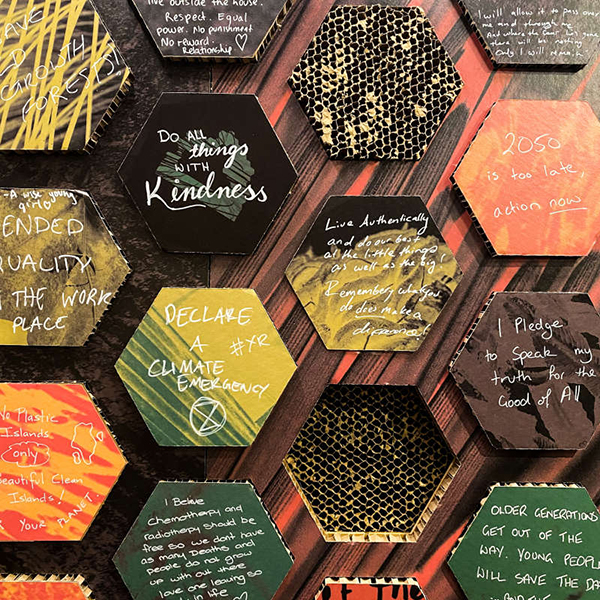 Samantha van Egmond, What bees can teach us about democracy, Museum of Australian Democracy, 22 July 2021

What do honeybees and a House of Parliament have in common? Fascinatingly, these highly intelligent pollinators rely on consensus building and vigorous debate in their decision-making process – whether they’re moving to a new hive or changing the queen. In a process honed by evolution over millions of years, making collective decisions based on shared interests means ensuring the health and survival of their colony.

Bigger decisions require more intense discussion, which Farrell says can be heard as a loud roar created by the increased hum of the bees. “If the mood of a colony changes, it can sometimes mean they’ve made a decision or are about to make a significant change, like changing the queen,” he says.

Along with these similarities, however, are some notable differences. While many think hives take a top-down authoritarian approach led by a queen bee, critical decisions are made collectively within the colony. “One way bees are unlike us is that they don’t have a leader and make entirely group decisions,” explains Farrell. In fact, the humble honeybee has much to teach us when it comes to a fully flourishing democracy.

“Bees don’t have an executive branch, which is quite unusual as most animals have a pack leader,” says Farrell. “In smaller groups, this works, but in a bee colony, with so many individuals, the communication can become very difficult, and having a leader doesn’t work as well.” By deliberating openly, in the hunt for a new home, for example, a majority count and a diversity of viewpoints are key to reaching a desirable outcome. “In that sense, they’re very much a pure democracy,” he says.

While collective intelligence helps to keep the colony running smoothly, honeybees contend with a number of external factors that pose major threats to their organised society and very existence. Globally the bee population is in serious decline, a phenomenon known as Colony Collapse Disorder (CCD). These threats include the overuse of pesticides and herbicides, as well as human activity resulting in habitat fragmentation and loss of food sources.

Visit Save the Bees for ways to take action to conserve bee colonies.

Our HiveMind: Democracy, Honeybees and Me exhibition uncovers the stories of beekeeping at Australia’s parliament houses, both old and new, and shares what we could learn from bees on collective decision making for democracy.