You are here: Home » Articles filed under: 'News' » Article: 'MoADOPH arson attack – a threat to spirit' 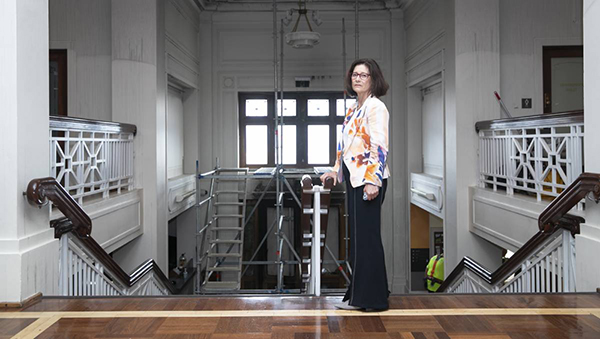 Sally Pryor, As the smoke clears after the Old Parliament House fire, there are glimmers of hope, The Canberra Times, 6 January 2022

It’s strange how small a grand old building can look when it’s been the subject of a concerted attack.

Old Parliament House, once Australia’s official seat of Parliament, opened in 1927 as a temporary building – a state that would last more than 60 years – had an air of crouched vulnerability on Wednesday morning, even with a large cohort of police officers stationed out the front. View video here.

But, exactly a week after protestors set fire to the front doors of the heritage-listed building, now the Museum of Australian Democracy, a remarkable amount of activity is already going on behind the blackened portico.

Inside, museum director Daryl Karp was still surveying the damage and marvelling at both the extent and fortunate limits of the fire. 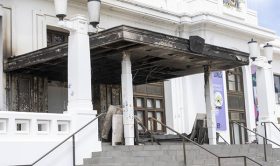 “From my perspective, it is as good an outcome, given the size of the flames, and the anger of the protesters and the limitations that we have, in managing it that you could possibly want,” she said.

“The sprinkler systems worked exactly as they should … We didn’t actually have the chambers flooded, none of that took place, it was absolutely the ideal outcome for a disastrous situation like that.”

Ms Karp’s hands were streaked with black; moments before, she had paused to run her hand pensively over the feet of the bronze statue of King George V that dominates Kings Hall.

The hall’s walls, ceiling and windows were all streaked with soot; many of the rooms and chambers throughout the building will need to be cleaned and repainted as soon as possible.

Ms Karp said the building had been full of staff and visitors on the day of the fire. One of the most popular tourist attractions in Canberra, Old Parliament House is beloved both as a museum and a place to bring the kids during the hot summer holidays, with its dedicated playrooms and shady courtyards. It’s now unlikely to re-open before the autumn. 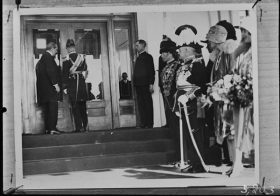 The opening of OId Parliament House in 1927. Picture: Museum of Australian Democracy.

It’s also a place of remarkable proximity to history, with a refreshing lack of security where countless momentous events have taken place on the front steps and in the offices and chambers within.

Nowadays, visitors can stand in the very same place Gough Whitlam gave his famous speech after being sacked in 1975 – a speech that’s recited by thrilled visitors of varying generations at least once on most days of the year.

People can wander through the parliamentary chambers and peer into the offices that were once crammed with MPs and staff, sit in the former press gallery, and see where former Prime Ministers John Curtin and Ben Chifley lay in state after their deaths. 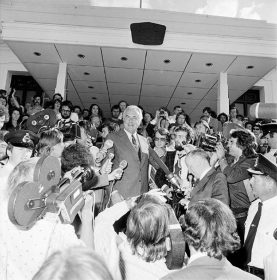 Gough Whitlam addresses the media after his dismissal in 1975. Picture: Australian Information Service.

Ms Karp said apart from the damage, the cost of which is as yet incalculable, her biggest fear, as a result of the protest, was that the museum would become a less open institution.

“We really have tried really hard to keep the spirit of Australia’s democracy of open dialogue, of non-violence,” she said.

“We don’t do bag searches, and we haven’t done security. And we’ve tried to really keep it the people’s place. And that’s my biggest fear, that moving forward that may have to change.

“Certainly it’s one of the conversations we’ll have.”

Meanwhile, heritage manager Emma Gwynn has her work cut out for her, assessing flame, smoke and water damage that spread up the inside front entrance, up the stairway and into Kings Hall.

She was not in the building on the day of the protest, but said seeing footage of the flames consuming the front entry way had been devastating.

“It was absolutely gut-wrenching to see the videos,” she said.

“You just can’t describe how it makes you feel when the whole of my job is about looking after the building, and then suddenly, you’re watching the flames.”

The clean up has been swift; water from the sprinklers and fire hoses was dried out as soon as possible, and a team of conservators has already been through to assess the damage to the doors and portico.

And there’s been a glimmer of hope in the wreckage; the doors, built in the 1920s from solid jarrah timber, may well be salvaged thanks to old-school craftsmanship.

“We had thought that they’d completely gone, and the conservators came and had a look and because of the construction and age of the doors, they’ve actually got four layers of jarrah, and [only] the outside layers are completely charred,” Ms Gwynn said.

She said if the doors had been constructed in recent decades, with a more streamlined design, or even a different timber, it’s likely they would not have withstood the flames.

“It would have been a completely different story,” she said.

She was also particularly relieved to recover from the wreckage one of the carved brass plaques that had covered a door handle. She had noticed it was missing when some of the first images of the wreckage were sent through.

As soon as she was able, she began to sift through some of the charred remains on the front steps, and found the brass plaque bearing the British coat of arms. 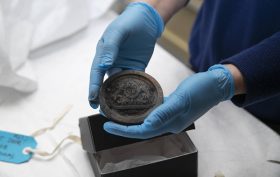 The door handles mirrored the coats of arms displayed across the top of the building – one Australian, the other British.

Ms Karp said it was incredible to think of how much these door handles had seen, right from the moment the Duke of York – the man who would later be king – opened doors with a golden key on May 9, 1927.

While it’s safe to say the plaque will need more than a polish with a rag and some Brasso, the country’s best conservators – seemingly all of whom have converged in recent days to offer assistance – are ready to work their magic.