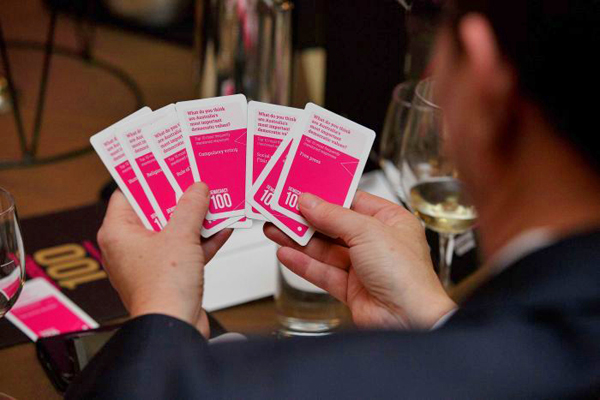 Democracy playing cards were designed by ThinkPlace and the Institute for Governance and Policy Analysis. Supplied: Museum of Australian Democracy.

It’s been a month of burka stunts and citizenship chaos, in which door-stopped politicians have been bluntly asked: is our democracy broken?

But amidst the chaos, perhaps we need to ask ourselves: what are democracy’s values? In Australia, 2017, that is. A trip to ancient Greece isn’t necessary.

Just mosey on down to Canberra and Old Parliament House, now known as the Museum of Australian Democracy (MoAD), which this year celebrates its 90th birthday.

As part of the anniversary, a bunch of us — 100 to be precise, including Dick Smith, Kerry O’Brien, Warren Mundine, Susan Ryan, Jenny Brockie — were invited to participate in a glittering occasion last week, called Democracy 100 You Can Make a Difference.

We heard ex-prime ministers Bob Hawke and John Howard muse out loud about our democratic future, in an intriguing interplay dubbed a “multi-partisan conversation”, brokered by Annabel Crabb and broadcast on the ABC.

Then, at the end of our Greek-inspired menu with beautiful wines from the Canberra region, the invited guests at 15 tables were exhorted… to play a game!

You could almost hear the quiet groan. Please, no role-playing, with partygoers asked to be senators or parliamentarians, fulminating on some confected set of issues. Luckily, the game turned out to be considerable fun.

We were distributed a deck of cards in three different colour sets, devised as part of a complicated process undertaken over the last 18 months by the museum and the University of Canberra’s Institute for Governance and Policy Analysis.

They’d questioned 1,244 Australians recruited at random, and 10 focus groups, about their attitudes towards democracy.

Out of that arose some consensus, which was very broad in nature.

And as part of the game we were asked to put ourselves through a mild form of House of Representatives tension and rank the ideas raised by the survey participants in order of importance.

We were asked a number of questions: What do you think are Australia’s most important democratic values? What should the responsibilities of champions of democracy be? What could be done to strengthen our democracy?

In the “values” category, I wonder how you would choose between the ten options offered to us?

We had an extra wild card on which to write down our own idea as a group.

Mr Howard, who was at our table, nominated “listen to the mob”, which I didn’t agree with.

It reeks of anti-thinking in my view. But guess what? I lost the argument! Just as politicians who don’t manage to persuade their confreres do. Welcome to their world, I thought to myself.

In the “how to strengthen democracy” category, these were the options culled from the focus groups:

Again, I don’t know how you would answer. But that is surely the point of our system. We are entitled to our own views, our own rankings and to argue with each other — but to use words, not stunts or swords.

One first-time voter from the surveys nailed it, in my view:

“We need to get more involved but they don’t have time for us and our views. Apart from election time. Then they’re interested in us. Maybe that’s what needs to change. They need to be as interested in our views when they’ve been elected.”

Without a doubt, the times demand we talk — rather than yell — more.