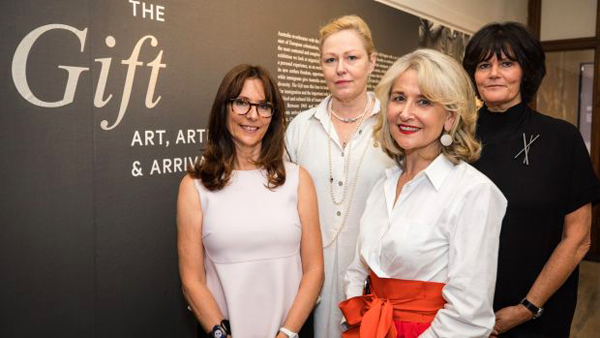 From left to right: Artists Hedy Ritterman, Linde Ivimy, Lousje Skala and Linda Wachtel, whose work is featured in the migration exhibition The Gift at the Museum of Australian Democracy at Old Parliament House in Canberra. Photo: Mark Nolan.

The story begins with a toy koala – furry, life-sized and huggable – and ends with the poignant reminders of the bottomless traumas of the Holocaust.

But in exploring the different experiences of migration to Australia, an exhibition at the Museum of Australian Democracy at Old Parliament House in Canberra has a single shining theme: human resilience.

In 1949, an eight-year-old girl named Isobel Saxelby was presented with a toy koala when she arrived in Australia as the 100,000th postwar British immigrant.

Today, the koala, in mint condition, stands in a glass case at the entry to an exhibition that responds to the notion of migration as a “gift”.

Their works, although marked with a sense of loss, also speak of the gift – of a new life, of those that pass between generations, and onto Australia as a whole.

From a worn leather belt to a sculpture made of rag and bone, a pair of silver candlesticks and a battered brown suitcase, The Gift traverses through stories of unimaginable horror to the almost impossible gift of a second chance.

Ritterman, whose work focuses on the story of her relative Richard, said the stories of migration were a sobering reminder of the power of human endurance.

“It brings to mind how privileged we are, and I’m always questioning what would I do under those circumstances,” she said.

Her subject survived three concentration camps, and came to Australia with only a belt from his home in Poland.

“I sat with Uncle Richard’s guilt [that lasted] his whole life, searching for his mother and his sister, that he couldn’t help them survive, that it was his mantra,” she said.

“He never remarried, I think because of that. He felt he didn’t deserve to, and I always think about that – how would I act, how would I help my children?”

Skala’s subject was her late mother-in-law Elizabeth, a Holocaust survivor who never talked about her experiences.

But before she died, she passed on a pair of silver Shabbat candlesticks rescued from her home.

“She was in the early stages of Alzheimers at the time, and it was the most profound gesture to me,” she says.

For Ivimy, collecting Czechoslovakian and Polish glass from the World War II became a way of creating a gift to those who had lost everything.

Her human focus was a pair of twins, Josef and Marta, who were separated during the war, and Marta was never found.