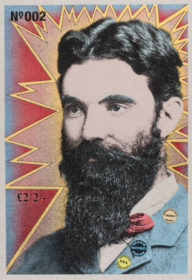 Can you name the first eight Australian prime ministers? Do you know anything about what they did or what they stood for? What their wives did behind the scenes, or indeed what their wives’ names even were?

When artist Alison Alder began the research for her contemporary exhibition onetoeight: Australia’s First Prime Ministers she didn’t know too much about the men who populated the halls of parliament, moving from Melbourne to Canberra’s (now) Old Parliament House in 1927.

Now her reimaginings of those eight men hang in a room, near the prime minister’s suite, in the corners of the House, in the Museum of Australian Democracy.

Alder, who is well known for her political poster making, developed the exhibition during a fellowship with the now defunct Australian Prime Ministers Centre.

“I didn’t know anything about the prime ministers at all when I started,” Ms Alder said.

“I first wanted to look at the men in that good, bad, black, white, way but actually I couldn’t so I looked for a way to show different sides of their story rather than just one view.”

Inspired by an image she found of Stanley Bruce’s cabinet where they were all wearing lapel badges, Alder presents each prime minister wearing badges that reference a key aspect of their time.

“Edmund Barton, for example, bought in the Immigration Restriction Act, the White Australia Policy, but also gave women the vote so there are opposing structures there,” she said.

“I asked myself how could I make a comment about that, and the lapel badges speak about those aspects of their personality.”

But in the end it was about the men, not their politics.

“I decided to focus more on their personalities rather than their parliamentary achievements.”

Chris Watson, prime minister for just four months in 1904, was described as a handsome and pleasant man, he was also the world’s first Labor prime minister.

Alfred Deakin’s portrait is adorned with pound and shilling typography in reference to his work Harvester Judgement and the passing of the Basic Wage legislation.

Aptly, the women behind the men are depicted here literally behind the men. Alder made a striking wallpaper design, reflecting the carpet of Old Parliament House, with the images of the prime minister’s wives. Pattie Deakin, Mary Hughes, Margaret Fisher, Jane Barton, Mary Cook Florence Reid and Ethel Bruce.

“Margaret Fisher was a pretty amazing woman, she was a well known suffragette, she even went to England to march to support the women’s movement,” Ms Alder said.

She could not find an image anywhere of Ada Watson – and she would love to know if anyone has one – so she substituted an image of her 22-year-old self in what she calls her “Alfred Hitchcock moment”.

The other installation she created for the exhibition was the Term-O-Meter, an animation which tracks the changing political hues of those heady first 28 years.

“Their comings and goings were very similar to today’s political climate,” she said.

Could she imagine the past eight prime ministers, the likes of Kevin Rudd, Julia Gillard, Malcolm Turnbull and Tony Abbott in such an exhibition?

“I think that would be very difficult in some ways because I think it would be hard for me not to be partisan about this latest lot.”

onetoeight: Australia’s First Prime Ministers will be on display at the Museum of Australian Democracy at Old Parliament House until February 2018. Entry is free after museum admission. Open daily from 9am-5pm. www.moadoph.gov.au