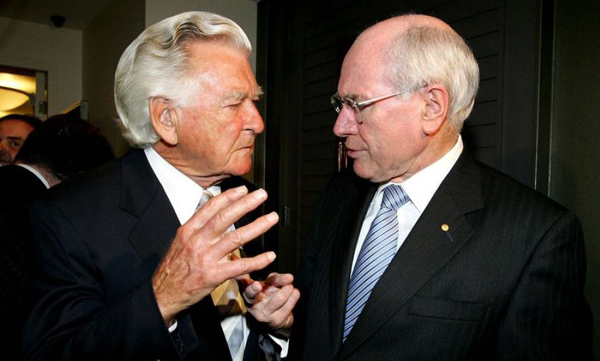 Former prime ministers John Howard and Bob Hawke have warned that career politicians without enough life experience are letting the public down.

Both men were asked to reflect on the state of Australian democracy in a discussion with Annabel Crabb on Wednesday night at the Museum of Australian Democracy at Old Parliament House, where they said both major parties were becoming less representative of the people who usually voted for them.

“My advice consistently to every young person who comes and asks me about [entering politics] is to make a life first,” Mr Hawke said.

“I detest seeing a young bloke or lady go into a trade union office, or a politician’s office, and spending a good deal of their time organising numbers in the branches.”

Mr Howard said all political parties needed to do a better job “filtering” candidates to make sure they were from diverse backgrounds.

“We have too many people who enter Parliament now, particularly at state level, who have had no experience in life other than politics,” he said.

“They’ve gone from school to university to the trade union, then to a politician’s office.

“If you’re on my side, they skip the trade union and they go to the politicians.

“We have too many now and I think it’s part of the problem we face.”

Mr Howard worked as a solicitor at law firm Clayton Utz for 12 years before entering Federal Parliament, while Mr Hawke was president of the Australian Council of Trade Unions.

Mr Howard said one of the problems with politics was that too many people were preoccupied with identity politics, which he described as “poison” in a democracy.

“You used to have a charter and try and persuade people right across the board, irrespective of whether they’re men, women, whatever their ethnic background,” he said.

“Now we increasingly find this pursuit of individual groups and the idea is to get all the little groups together.

“What that does, in my opinion, it poisons the capacity of a political party to attract a cross-section of people, because if they think it’s being dominated by one particular group they don’t like, they don’t join it.”

Mr Hawke had his own take on a poison to democracy — federalism.

“I’m going to be true to myself and mention what I have on many occasions — that if we’re going to optimise the chance for democracy to be effective in this country, we’ve got to get rid of the constitution we’ve got,” he said.

“We’ve got to get rid of the states. It’s an absurdity.”