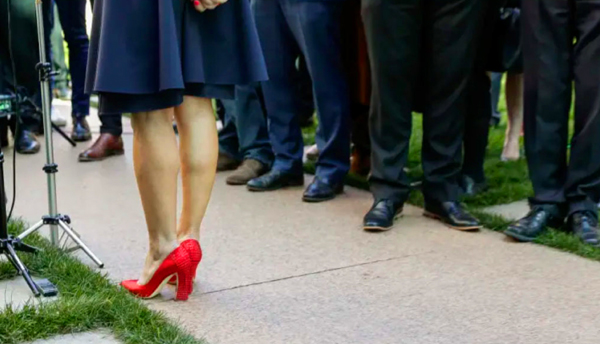 Red is a powerful colour, rich with symbolism associated with strength, wealth, war and fertility.

Archaeologists believe it might have been the first colour used by humans due to its use in ancient cave paintings.

So nobody should have doubted Julie Bishop had something of significance to say when she arrived at a press conference in the tumultuous August week that Malcolm Turnbull lost the prime ministership wearing red shoes.

The shoes she was wearing – red satin with bejewelled heels – stood out in the sea of black and white as Ms Bishop resigned as Australia’s first female foreign minister.

On Wednesday the shoes will be given to the Museum of Australian Democracy at Old Parliament House where they will go on display in King’s Hall.

“Red is one of my favourite colours. It evokes power, passion and fashion. In power I always noted that many nations have red in their flags and that’s because it symbolises courage and freedom. Passion, well, you know, red hearts, red roses. And fashion – that’s why they call it a red carpet – and red lipstick, red nail polish, red shoes.”

Fairfax Media photographer Alex Ellinghausen took a picture of Ms Bishop’s feet as she announced her resignation that will be exhibited with the shoes.

Ms Bishop said she was not aware of the angle Ellinghausen took until later in the day.

“I was surprised that so many people read so much into it but I have been a big fan of the red shoe emoji in the past and so a number of people saw it as a statement of women’s empowerment which is what I believe the red shoe emoji is intended to be.”

In the days that followed Liberal women also took to wearing red.

Ms Bishop described the shoes as a “comfortable work boot”.

Several institutions have requested the shoes but Ms Bishop chose the Museum of Australian Democracy because it is housed in Old Parliament House. The same week the Liberal Party changed leaders she had attended an event there to mark the 75th anniversary of the first speech made by Dame Enid Lyons, the first woman to be elected to the House of Representatives.

Old Parliament House is also where Ms Bishop made her political debut – as a delegate representing Western Australia at the 1998 constitutional convention. She was elected to Parliament at the 1998 federal election just a few months later.

Since the August leadership change Ms Bishop has been seated next to Julia Banks, who has been frustrated by the Liberal Party’s treatment of women and now sits on the crossbench.

She has also found herself a lightning rod for discussion about women in politics.

Women come up to her in the shops, in airports and on the street to talk about what happened.

“Some are angry and I say, ‘but I’m not angry’ and they say, ‘that’s fine, I am’. Some are curious, some are disheartened. But I make sure my message to them is a positive and uplifting one,” Ms Bishop said.

“My advice is to back yourself, back your judgement and your intuition, set your own high standards and don’t be distracted by those who criticise you for not reaching their standards and couldn’t or wouldn’t reach those standards themselves.”