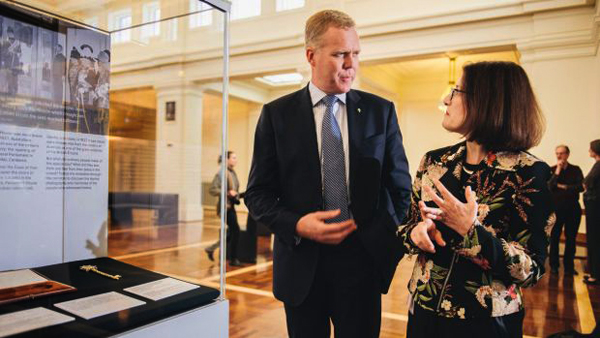 The Speaker of the House of Representatives Tony Smith and director of the Museum of Australian Democracy Daryl Karp, unveil the gold key used by the Duke of York to open Old Parliament House in 1927. Photo: Rohan Thomson.

It’s taken 90 years, but the 14-carat gold key used to open Old Parliament House in 1927 has finally made its way back to the grand old building.

On May 9, 1927, the Duke of York took the exquisite and rather delicate looking key and unlocked the heavy wooden doors that looked out onto a bare paddock, opening, in some respects, a brand new nation.

If you’re wondering whether the key might still actually unlock those doors, apparently the locks have been changed since then.

The key is a centrepiece in a new exhibition at the Museum of Australian Democracy, The Opening Day: 9 May, 1927, marking Old Parliament House’s 90th year.

The key usually resides in a cabinet in the office of the Speaker of the House of Representatives. It has been loaned to the exhibition by current Speaker Tony Smith for the first six weeks of the exhibition, which will continue all year.

Director of the Museum of Democracy Daryl Karp suggested the museum might be a good place for the key to find its permanent home, light-heartedly bantering with Mr Smith, “talking politics in the most appropriate of places,” she said.