MoAD’s Behind the Lines 2019 opens 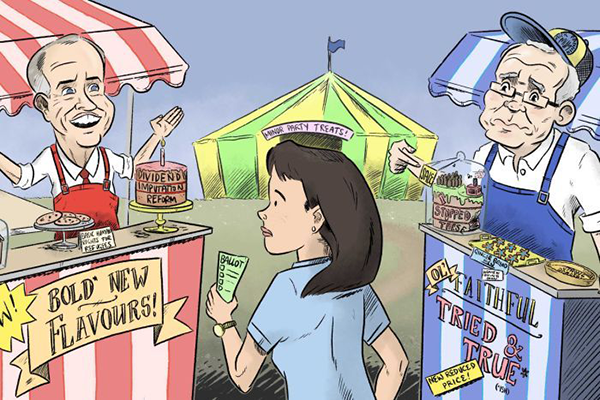 Like most cartoons on display, Wes Mountain’s work featured the election campaign. The Conversation: Wes Mountain.

Tahlia Roy, Behind the Lines exhibits the year’s best political cartoons, which even the politicians love, ABC News, 7 December 2019

The wit, caricatures and illustrative political satire usually reserved for the morning newspaper can now be seen on the walls of Old Parliament House.

The annual Behind the Lines exhibition has selected and framed what it says are the 80 best political cartoons of 2019.

While Prime Minister Scott Morrison was often depicted as a “one-man band” who won the election himself, cartoonists were at times scathing of his thwarted opponent, Labor’s Bill Shorten.

The cartoonist of the year, Jon Kudelka, said using humour and cheek to cut through political spin helped keep the country’s leaders honest.

“In a federal election, both sides are desperately trying to trick the electorate into believing that they’ve got their best interests at heart — and there’s always plenty to work with there,” Kudelka said.

A recurring theme was criticism of the Australian Federal Police raid on the ABC and the home of News Corp journalist Annika Smethurst. 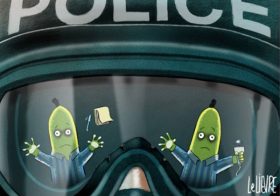 The federal police raids on the ABC (as well as B1 and B2) featured widely.Glen Le Lievre

Kudelka described his trade as the “rickety shed at the back of the fourth estate”.

He said political cartoonists needed to stay especially grounded so they could punch upwards, call out the powerful and present their ideas as clever but easy-to-understand sketches.

“You’ve got to be a little bit careful of getting tickets on yourself because, as you’re investing in hubris and narcissism, you’re doing exactly what you’re accusing politicians of,” he said. 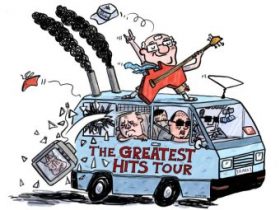 “But, nonetheless, I’m quietly smug about it — it’s lovely that people notice.

“You tend to draw a cartoon of a day and send it off into the ether and it appears in the paper, and you don’t hear much more about it.”

Kudelka was also tasked with creating a headline cartoon for the event and its 2019 rock ‘n’ roll theme.

It features Mr Morrison atop his band’s coal-fired bus, drawing attention away from his ministers, a TV with Mr Shorten being thrown out of a window, and Tony Abbott’s budgie smugglers floating away into the distance.

But while the cartoons are usually unflattering, some politicians — or their staff — seem to love being the spectacle.

“Usually, when you do a particularly cruel one, you’ll get an email from their staffer saying: ‘Can we please buy a print of it?’,” Kudelka said.

“I’m not sure what they do with them. Maybe they ritually burn them or they put it up in their office?”