May 27th, 2021 | Browse other: News. | Tagged with: A hive of activity at MOAD reveals some wannabee pollenticians, HiveMind exhibition, Museum of Australian Democracy | 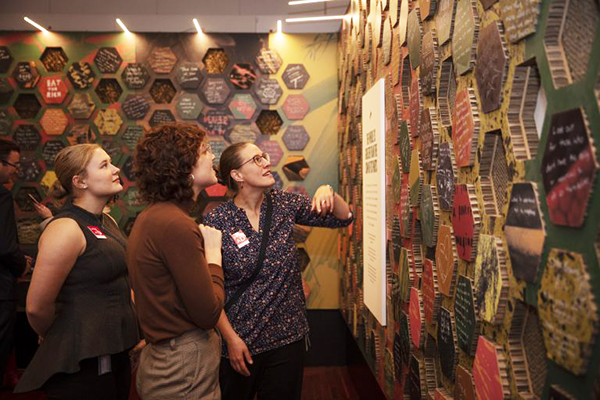 The hexagons are the exhibition’s interactive element. Photo: Thomas Lucraft.

Lottie Twyford, Bees and democracy? A hive of activity at MOAD reveals some wannabee pollenticians, RiotAct, 20 May 2021

They are two things that we don’t often think about together, but the Museum of Australian Democracy’s newest exhibition – HiveMind – proves that democracy and bees have a long relationship.

MoAD’s latest addition is on display now and combines the fascinating tale of beehives and bee-keeping at Parliament House (old and new) with the democratic tendencies of bees themselves.

According to MoAD Director Daryl Karp, the journey to this exhibition has been serendipitous.

“Around the same time, Professor Tom Sealy had published a book about the democratic tendencies of bees,” she explained. 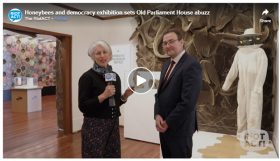 William Yates, a Liberal backbencher in the ’70s, is credited with introducing bee hives to Parliament through a bit of trickery.

On the first of April, the story has it that he asked Speaker Billy Snedden if he could bring the bees to the grounds. The Speaker, believing it to be simply an April Fools prank, agreed.

William Yates’ son Peter Yates said his father then proceeded to set the hives up in the grounds a few days later, much to the shock of the rest of the politicians.

“All the family is so proud of Dad and his work for democracy, but also his passion for bees and bee-keeping,” he said.

HiveMind was launched on Tuesday, 18 May, ahead of World Bee Day on Thursday, 20 May, with a panel discussion between award-winning journalist Jan Fran, Peter Yates and current Head Beekeeper of Parliament, Cormac Farrell. A moving Welcome to Country was also given by Ngunnawal elder Wally Bell.