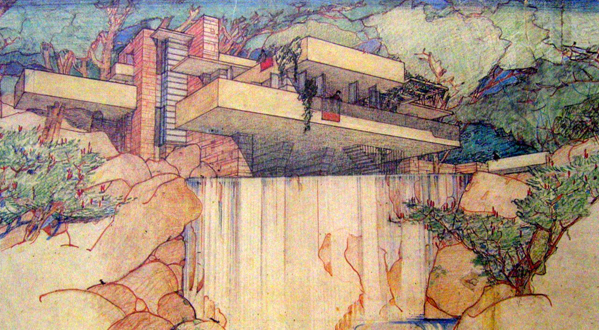 Wright’s passion for the natural environment was a constant throughout his career, as shown by Fallingwater.

On 16 October 1956, Frank Lloyd Wright hosted a press conference at Chicago’s 1,700-room Hotel Sherman. Perhaps the US’s most famous architect needed a truly big venue to unveil the Illinois, a proposal for a mile-high skyscraper boasting 528 floors, served by 56 atomic-powered elevators, housing 130,000 tenants and equipped with a garage for 15,000 cars and twin helipads for 100 helicopters.

Knowing how to seduce the press, Wright’s 9ft perspective drawing of the 5,280ft tower—dramatic enough in its own right—was enlarged, photographically, to 22ft. This was not just thinking big, but radically, too. Strangely, or so it must have seemed, the Illinois was part and parcel of Wright’s belief that the modern city was a monstrous, sprawling creation that needed to be kept in check. Ideally, a city the size of Chicago could be housed in just a very few vertiginous skyscrapers surrounded not by streets but by fecund parkland. Wright’s religion was nature with a capital “N”. The Illinois was a way of protecting and encouraging nature by condensing and containing the modern city.

The press lapped up the story. The 88-year old architect was good copy, as he had been for much of the past 70 years. Controversial, outspoken, witty and inspired, Wright thought big and acted on a very large stage indeed. His life had been the stuff of high drama and headline-stealing tragedy. Homes (two) burned down. Mistress and her children murdered by a mad axeman. High-profile divorces. And, lest any US newspaper journalist forget, a succession of brilliant and innovative buildings and design proposals almost from the day he set up shop under his own name in 1893. Frank Lloyd Wright contained multitudes.

Perhaps not surprisingly, then, the archives he left for posterity are on a multitudinous scale. In 2012, these were transferred from Wright’s former Taliesin studios in Wisconsin and Arizona to Columbia University and New York’s Museum of Modern Art (MoMA). Since then, curators have been unpacking around 55,000 drawings, 300,000 sheets of correspondence, 285 films and 2,700 manuscripts.

To celebrate Wright’s 150th anniversary, MoMA is putting around 450 works from the archives on display in a new exhibition, Unpacking the Archive. Alongside these, it has published an ambitious catalogue featuring wide-ranging essays attempting to interpret this architectural wealth. It does need some interpretation, for over a 72-year career, Wright’s style of design and drawing evolved, like those of long-lived painters, through a number of “periods”. What these have in common is compelling and often quite brilliant draughtsmanship, displaying the successive influences of the Arts and Crafts movement, Japanese printmaking, the Viennese Secession, Art Deco, European Modernism (not that Wright would ever admit this, especially given his influence on the latter), automotive styling—Wright owned 85 cars in his lifetime—and even, perhaps, Hollywood.

Wright would have made a particularly fine art director and set designer. His own dramatic life was, in part, the inspiration for Ayn Rand’s best-selling novel, The Fountainhead (1943), given a melodramatic Hollywood treatment in 1949 with Gary Cooper in the lead role. Although the main character owed as much to Le Corbusier in his outlook and ideals as he did to Wright, there was no question that the picturesque Wisconsin architect was anything other than a star. And Wright knew it. Asked for his occupation in a court of law, he had replied, “The world’s greatest architect”. When his third wife, the Montenegrin ballet dancer Olgivanna Lazović, remonstrated with him, he replied, “I had no choice, Olgivanna. I was under oath.”

In the late 1950s, as the Solomon R Guggenheim Museum rose on Fifth Avenue, and as his studios continued to produce unprecedented proposals for future buildings, Wright appeared on television several times, proving to be engaging, amusing, memorable and profound, and certainly so in the live interviews he gave in September 1957 for The Mike Wallace Interview on religion, war, mercy killing, art, critics, America’s youth, sex, morality, politics, nature, death and his mile-high skyscraper.

Driven by big ideas and a desire to reach nationwide audiences, Wright mastered any number of presentation techniques, from coloured pencil drawings to books, magazines, exhibitions, monographs, films, radio and television. He even appeared on the popular TV quiz show, What’s My Line? He also knew—the MoMA exhibition is very good on this—how to attract talented young assistants, some straight from high school, who, quite simply, drew beautifully. In fact, the MoMA exhibition reveals many of the set-piece Wright drawings to be the work of assistants, notably Jack Howe, known as “the pencil in FLW’s hand”, who, joining the studio in 1932 aged 19, was its chief draughtsman from 1937 when Fallingwater in Pennsylvania—one of the most renowned of all US buildings—was under construction.