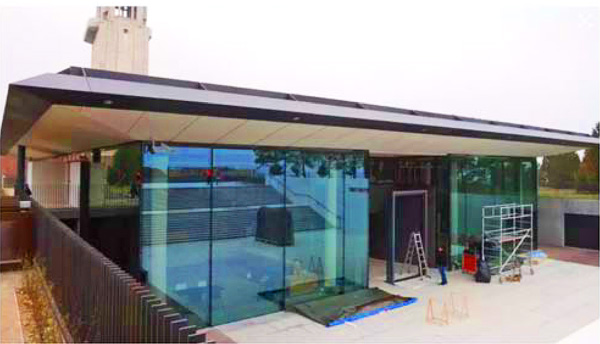 Villers-Bretonneux: The most expensive museum built in France in decades is about to open its doors – and it’s Australian.

The $100 million Sir John Monash Centre, at Villers-Bretonneux in north-eastern France, is less than a fortnight from its official opening by Prime Minister Malcolm Turnbull – and visitors will be let through in a ‘soft launch’ from Monday.

The Centre, tucked behind the Australian National Memorial at Villers-Bretonneux, commemorates Australia’s presence on the Western Front in World War 1 in a digital extravaganza of immersive video recreations, interactive touch screens and – here and there – historical relics.

The project was announced at the site in 2015 on the day after Anzac Day by then-PM Tony Abbott, who said the story of Australia on the Western Front “should be much better known”.

“Gallipoli has dominated our imagination but the Western Front was where Australia’s main war was fought,” he said. “This is where our thoughts must dwell if we are truly to remember our forebears, pay homage to their sacrifice and honour their achievements.”

It would be a lasting legacy of the centenary of Anzac commemorations, he said.

“We should recall our victories as much as our defeats.”

According to media reports Abbott has been invited to the Centre’s opening. It will be an uncomfortable presence: he recently borrowed the Monash brand for a political lobby challenging Turnbull’s leadership on energy policy.

The Monash family, who are expected to also be present at the opening, asked Abbott to withdraw the Monash name from his group which they said promoted an “anti-science and anti-intellectual argument” that a modern-day Monash would likely have rejected.

Meanwhile the Centre is in a sprint to the finish line under the eye of Caroline Bartlett, the project manager who will be the centre’s first director when it opens.

Bartlett has been so busy that she only heard about the Monash Forum controversy on Wednesday, she said – and she has nothing to say about it.

“I just run the Centre,” she said.

She said it had been a “fantastic” experience building the Centre, which has only a few aesthetic touches to go before it’s finished.

She insisted there was “nothing out of the ordinary” in the building’s construction, despite the fact that a pyrotechnic survey of the site found 234 kg of unexploded ordinance in the ground they were about to excavate.