April 10th, 2020 | Browse other: News. | Tagged with: 800 amber pieces, ecosystems of the ancient Southern Hemisphere supercontinent Gondwana, haul of 5, Historic haul of Australian amber fossils, one of the biggest discoveries in Australian palaeontology | 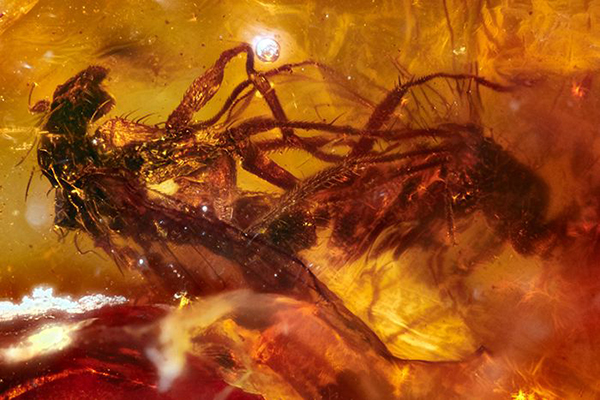 Birds do it, bees do it, even ancient long-legged flies did it… At least this pair did — until they were suffocated in a glob of tree resin around 40 million years ago.

These flies are locked in amorous embrace, looking just the way they did when they died.

They are part of giant haul of the oldest fossilised resin, or amber, to be found in the Southern Hemisphere, according to researchers whose findings are published today in the journal Scientific Reports.

The list of life-forms found ‘snap frozen’ in time in this fossil treasure trove sounds like the Twelve Days of Christmas. 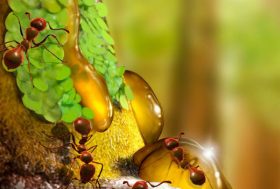 Amber is created from resin that trees exude to protect themselves from insect and other damage. Scientists love it because it preserves animals in detail in 3D. (José Antonio Peñas).

“This is one of the biggest discoveries in Australian palaeontology,” said lead author Dr Jeffrey Stilwell of Monash University.

The haul of 5,800 amber pieces from sites across southeastern Australia, Tasmania and New Zealand goes some way towards balancing the planet’s amber fossil record. 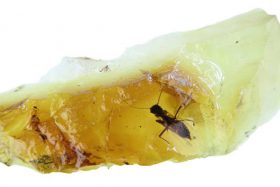 He said the oldest amber was 230 million years old, from the Fingal valley in northwest Tasmania, which matches the age of amber found in the Northern Hemisphere.

The researchers found the two mating flies (Dolichopodidae) in 40 – 42 million year-old amber from a coal mining site in Victoria.

The fossils come from a time when Australia was part of a slowly disintegrating supercontinent called Gondwana, which included Antarctica and other land masses. 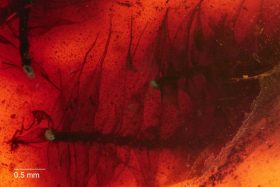 A new species of delicate moss trapped in 42-40 million-year-old amber from a Victorian coalmine. (Jeffrey Stilwell and Andrew Langendam).

The climate was warm and moist and the land was covered in forest full of bugs.

At the same coal mining site the researchers found the first Australian amber fossils of slender springtails and ants.

“I am surprised that in more than 100 years of studying fossils in Australia that a fossil ant has never been found,” Dr Stilwell said.

“We can say ants go back to at least when Australia and Antarctica were attached 40 million years ago.”

“So we’re getting a real glimpse into some of these ancient terrestrial ecosystems that nobody’s ever known anything about.” 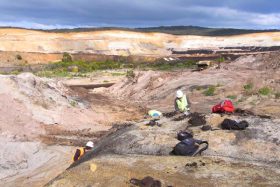 This coal mine site was bulldozed and a freight container full of amber-bearing coal was hauled away by the researchers. (Jeff Stilwell).

Further south in a site in Western Tasmania the researchers found 54 – 52 million-year-old amber fossils, including a complete mite and a scaly insect called a “felt scale”.

“These are the oldest animals and plants in amber from the entire southern Gondwana supercontinent,” Dr Stilwell said.

He said the team recovered a lot of material from the Alcoa coal mine in Anglesea Victoria.

“We were able to bulldoze the site and we now have a freight container full of amber-bearing coal to go through,” he said.

While their lab is currently in shutdown because of the coronavirus pandemic, the team is looking forward to getting on with the work.

“We have years upon years of coal to look through and a never-ending supply of amber in western Tasmania,” Dr Stilwell said.

“We’re just getting started, there’s so much to learn.”

A window on the past

The findings have been welcomed by other experts.

“[They] do a great job in revealing that Australasia has a range of old to very old amber deposits and that, significantly, there is good potential to find fossil invertebrates and plants in them,” said Trevor Worthy, a palaeontologist at Flinders University.

“This first step, the initial discovery, is the crux that often unleashes a flood of discoveries,” Dr Worthy said.

Ken Walker, a senior curator in entomology from the Museum of Victoria said the findings were a significant window to the past.

“Not just as fossils but as 3D animals in a state of suspended animation. Imagine having a pair of mating flies from millions of years ago,” Dr Walker said.