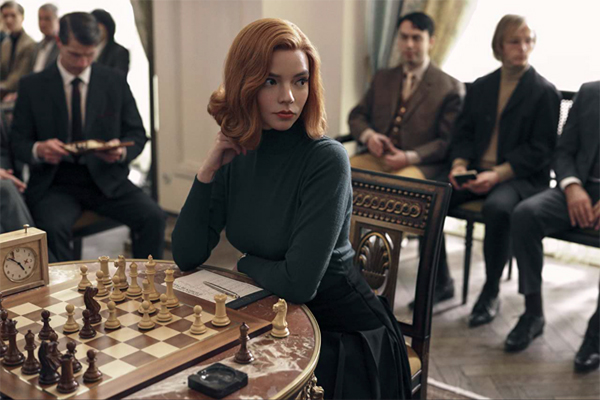 After a challenging year, museums are opening themselves up to creative revenue streams—including sponsored content. 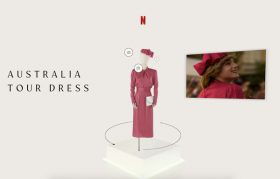 Pink dress worn by Princess Diana during a Royal tour of Australia in 1983. Image courtesy Netflix and the Brooklyn Museum.

If you’ve visited the Los Angeles County Museum of Art recently, you may have seen a whimsical installation: 15 figures dressed in their holiday party best, mid-awkward dance move, wine sip, and emotional conversation.

Artist Alex Prager created at the tableau not at the request of the museum, but of the beer brand Miller Lite. The project doubled as both a temporary outdoor exhibition and an ad campaign celebrating the end of office holiday parties and the freedom to indulge in a little more “Miller Time.”

The project is part of a growing trend in the museum sector that might scandalize traditionalists but is quickly being embraced by cash-strapped institutions: sponsored content. On either side of the Atlantic, museums have teamed up with corporations in an effort to utilize their spaces—and collections—in order to reach new audiences and make a little extra dough.

In October, the Brooklyn Museum produced an interactive virtual exhibition featuring costumes from the wildly popular Netflix series The Queen’s Gambit, as well as from the fourth season of The Crown. While the presentation was entirely digital, the display was staged IRL in the museum’s famous Beaux-Arts entryway alongside related objects from the collection. 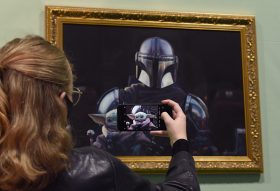 A view of Disney+’s commissioned portrait of The Mandalorian. Photo: NPG.

Meanwhile, in late fall in London, an offsite pop-up display in Covent Garden was the result of a collaboration between Disney+ and the National Portrait Gallery. The presentation included a Disney+-commissioned portrait of The Mandalorian, the protagonist of the eponymous hit show, as well as six portraits of Star Wars figures from the museum’s own collection. Members of the Gallery’s Youth Forum assisted the curatorial team in creating the captions for the display.

Make Money Where You Can

Last year was tough on museums. By November, the average US museum had lost $850,000 to date, according to a survey by the American Alliance for Museums, which cautioned that the figure was much higher for large institutions. Budgetary pressures forced the Brooklyn Museum to reduce its staff by seven percent.

“At a time of challenged budgets, we will see museums experimenting boldly with earned-income opportunities,” András Szántó, a sociologist and strategic advisor to museums, told Artnet News. “Traditionally, in some institutions, there was some reluctance to do so, although there was more [activity] than people usually see—countless private events that were not communicated outwardly.”

Not everyone is pleased with the more public-facing direction. Los Angeles Times critic Christopher Knight wrote a scathing review of the LACMA project last month, calling it “tacky.” He took particular issue with the vague texts accompanying the display, which noted that the project was sponsored by Miller Lite but failed to explicitly detail the company’s role in developing the project.

“Omitting any reference to the brewing company’s ad campaign,” Knight argued, “is like neglecting to mention that Pope Julius II and the Vatican were behind the Sistine Chapel, while Michelangelo was more than just a guy with a paintbrush and a dream.” 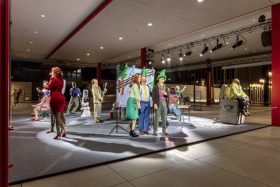 While corporate sponsorship used to be limited to a tagline under an exhibition plaque, museums see these more immersive—and, some might argue, creatively compromised—initiatives as a promising new avenue. It’s one they are entirely unashamed of.

“This installation is a timely and welcome addition to our public sculptures that allow visitors to safely experience art outdoors,” said LACMA’s contemporary art curator Rita Gonzalez. “We hope the work brings some humor, levity, and reflection during these difficult times.”

Brooklyn Museum director of corporate relations Rafael Flores noted that its Netflix partnership came about well into lockdown. “We had been thinking of ways to engage our audience digitally, so this Netflix project made perfect sense for the time and context,” he told Artnet News.

Plus, Brooklyn’s senior curator of fashion and material culture Matthew Yokobosky added, the project felt like an extension of the partnerships the museum had done in the past for its David Bowie exhibition in 2018, including an AR project with the New York Times and a collaboration on a virtual version of the show with Sony Japan. (Interestingly, Yokobosky noted, even in the two years between the Bowie show and today, technology had improved such that complex costumes were far easier to capture virtually.)

For its part, the National Portrait Gallery said its Disney+ collaboration offered a canny opportunity to share the collection while its building is closed for renovations through 2023. “There is no doubt that Star Wars is a cultural phenomenon that has had a huge impact on popular culture and has involved a wide range of talent from across the British film industry,” the museum’s chief operating officer Ros Lawler said. The two-day off-site partnership exhibition “provided us with an opportunity… to introduce new audiences to our portraits.”

None of the museums would disclose specifics about how much money changed hands. LACMA noted that Miller Lite’s sponsorship went toward underwriting the cost of the installation. As part of the NPG partnership, Lawler said, Disney+ is supporting the museum’s youth program for 14- to 21-year-olds.

A Model for the Future? 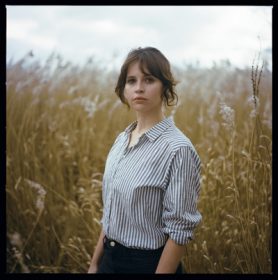 It’s clear these kinds of collaborations have been particularly popular in the lockdown era.

“We’re all looking at new revenue streams for cultural institutions,” Yokobosky said. “We’re trying to rethink the admissions part of our overall budget now because even if you can be open, you can only be at 25 percent capacity. So we’ve all had to go back and re-forecast what the economics are going to be for the fiscal year.”

The question now is whether these sorts of projects will continue beyond this phase. So far, it sounds like the answer is yes. “We’d love to work with Netflix again,” the Brooklyn Museum’s Rafael Flores said. “We’d also welcome collaborations with companies that allow us to bring our mission, programs, and collections to broader audiences.”

And that’s not only because of economic pressures, Szántó pointed out. “This generation is acutely aware that Jay-Z and Beyoncé and Swizz [Beatz] can do more for art awareness, particularly among younger audiences, in a single video appearance than a series of exhibitions.”

Szánto mentioned a museum in Africa that commissions local pop stars to sing about their new shows. “The songs go on the radio and this is how they get people to come,” he said. “In short: Popular culture can be a great resource, when used wisely and creatively.”