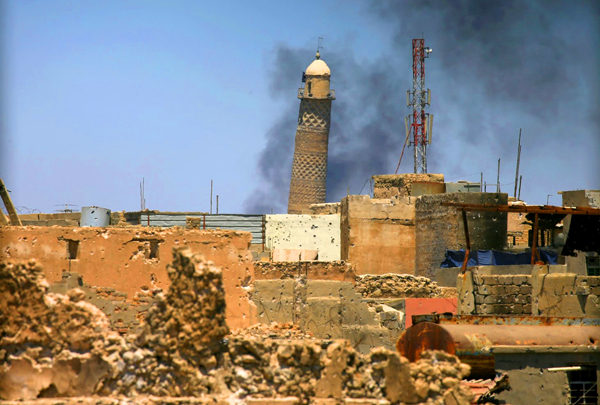 Cultural icons such as the Sydney Opera House, the Harbour Bridge and Indigenous sacred sites could and should be protected in possible conflicts

The senseless destruction of the Great Mosque of al-Nuri in Mosul last week is not only a monumental loss for the people of Iraq but for all humanity. The 12th century place of worship and its famed leaning minaret were landmarks in the Old City and featured on local currency.

Attacks on cultural property – also demonstrated by the recent destruction of ancient Roman ruins in Palmyra, Syria, the oldest Christian monastery in Mosul, Iraq, along with mausoleums and shrines in Timbuktu, Mali – reveal a worrying and unacceptable trend in modern armed conflict.

The goal is not only the military defeat of an opposing side, but also the destruction of their very identity and dignity.

But there are concrete steps Australia can take to better protect cultural property.

We can look to the United Kingdom where earlier this year, parliament passed the UK Cultural Property (Armed Conflicts) Act. This legislation ensures that churches, mosques and places of historical or cultural significance are protected and not targeted in times of war. Cultural artefacts such as statues and artworks that could be looted or removed from their place of origin are similarly protected under this law.

During the act’s passing, the House of Lords committee observed that legislative action might encourage other countries in the Commonwealth to adopt similar laws.

Australia could also act under international law. Two protocols that supplement the 1954 Hague Convention on the Protection of Cultural Property in the Event of Armed Conflict have not yet been implemented by the Australian government.

The first protocol obliges occupying armed forces to take precautions to prevent the export or trafficking of cultural property and to ensure any removed treasures are returned at the end of hostilities. The second protocol requires that nation states identify cultural property on their own territory and takes measures in peacetime to safeguard them.

Historically, concerns were raised in relation to the first protocol: would they place an impossibly high obligation on Australia to protect foreign cultural property during military operations? Would they hamper any military action? Or would Australia become liable for losses to another country’s cultural heritage if we were in a situation of occupation?

It is now clear these concerns can be overcome as 105 other countries have adopted the first protocol. The UK law offers useful guidance by expressly referencing existing laws of armed conflict and only those knowingly in receipt of stolen cultural property are liable for prosecution. The US, Nato and Canada have also made moves to reinforce respect for cultural property.

These sound responses by other countries are welcome answers to the questions raised regarding Australian military operations overseas. And the lead taken by our sister Commonwealth states provides a useful model for Australia as we share a common legal tradition.

Critically for Australia, enacting the second protocol requires that a country prepares inventories of property which it deems as being of “great importance to the cultural heritage”. Already, most Australian galleries and museums have complete detailed records of their cultural treasures and protection plans in the event of a natural disaster. This new obligation would be an extension of those processes along with a broader survey of what we, as a community, consider to be deserving of such protection.

Cultural icons such as the Sydney Opera House, the Harbour Bridge and Indigenous sacred sites could be protected. Deciding what other Australian cultural artefacts should be protected during conflict would be a useful and important community exercise. It would require critical cooperation between all levels of governments to create the inventories of our most significant cultural heritage. Ultimately our most important cultural property could be identified with an internationally recognised symbol; the Blue Shield is already used by many countries around the world to identify and protect their most treasured sites.

The current challenge the world faces in confronting non-state actors (such as Islamic State) is their disregard for international humanitarian law. Adopting such laws would signal Australia’s resolve to respect and protect diverse cultural values and its commitment to cultural identity. They would not undermine Australian military effectiveness, but would, rather, stop one avenue of terrorist funding and enhance our military cooperation with key allies.

Support for such legislation offers a clear opportunity for bipartisan agreement. Some of our allies have ratified these protocols after careful study of the impact they may have on military operations and the domestic protection obligations. It’s high time Australia – as home to the oldest living Indigenous peoples and cultures on the planet, with countless sites of outstanding cultural significance – joined the party to protect its priceless culture and heritage at home and around the world.

We need to demonstrate leadership and respect for the ancient cultures of the world. It’s time to clearly state our stance in a world where ideas of cultural tolerance and diversity are under both rhetorical and real attack.