You are here: Home » Articles filed under: 'News' » Article: 'Moving beyond Mawson' 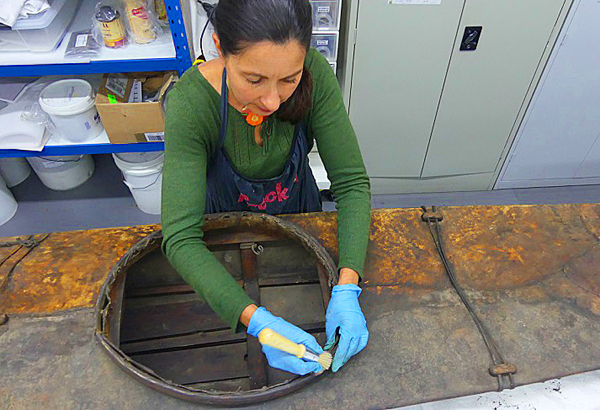 The gallery, located on the third floor of the Museum, celebrates not only the feats of geologist and polar explorer Sir Douglas Mawson, who was chair of the South Australian Museum board in the 1950s, but fellow South Australian explorers of the Heroic Era: John Riddoch Rymill and George Hubert Wilkins. The trio represented a polar monopoly for Adelaide before government-led ventures from the late ‘40s — a fact Mark Pharaoh (senior collections manager of the Australian Polar Collections) is keen to exploit.

“Essentially, South Australia produced all of Australia’s polar expeditions — Mawson never went to the Arctic but Rymill and Wilkins did,” Pharaoh says. “Between them they led upwards of a dozen [expeditions]. For our little state, which is not the most southern and not the most populous, to have the only expedition leaders is quite significant, not least to a museum because that means they own the expeditions, and what’s left over after the expeditions: the photographs, the diaries, the artefacts. And that’s, of course, the things museums want to build collections around.”

New acquisitions that will be in the gallery include the suit Mawson was knighted in and a model of the Aurora, the ship he used on the first Antarctic expedition he led, alongside new interactive displays. Essentially, the revamped gallery allows Pharaoh and his team to expand the gallery’s focus, as it was primarily about Mawson’s 1911-1914 expedition — the Australasian Antarctic Expedition (AAE).

“We wanted to move away from the AAE towards Mawson’s last expedition, which is known as the Discovery Expedition for short.”

With the revamped gallery, Pharaoh wants visitors to realise that South Australia’s polar monopoly doesn’t begin and end with Mawson.

“We now finally mention Wilkins and Rymill who have been long overlooked and unjustly so,” he says.

“In 2001 interest in Wilkins started to rise again. Dick Smith and Australian Geographic opened the old Wilkins homestead at Mt Bryan East [in the Mid North]. Then in 2005 there was the centenary of the birth of John Rymill. Given the interest with these two from around those times, we’ve been acquiring material from Rymill and Wilkins sources, particularly their families. We didn’t have the resources to do a whole new gallery as that would have told three whole new stories. But we have finally managed to secure some of their objects and we have an option for more digital functions to tell more of their stories later.”

The Australian Polar Collections gallery is open to the public