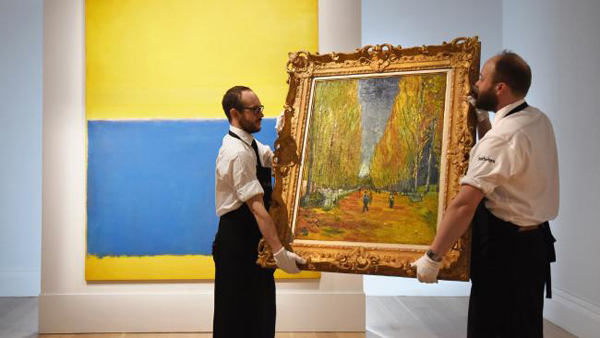 How do you transport three Egyptian mummies across international borders? With the appropriate paperwork governing the movement of human remains, four armed guards, and the utmost care, as Adam Worrall, an almost 30-year veteran in the complex business of transporting, handling and installing art, found out some years ago.

Worrall, assistant director of exhibitions and collections at the National Gallery of Australia, had been tasked with returning three consignments of Egyptian artefacts from Melbourne to The Netherlands. As part of the stipulations of the loan agreement, there were to be two armed security guards keeping an eye on the first shipment of two pallets during the three-hour stopover at Hong Kong, and another two to shadow Worrall, the art courier, at all times.

“And so I had two armed security guards following me around with guns while I did my duty-free shopping in the terminal, and standing outside the door while I went for a quick shower. I couldn’t convince them otherwise.”

Worrall had further diplomatic entreaties to make with the cargo supervisor on the tarmac who, to his horror, had decided that his valuable shipment could not go on board as the overall load was deemed too heavy. He was told he would have to wait until his next two consignments arrived the next day and fly them all together. The problem was that, like the royal family, art collections rarely travel together, in case of misadventure. He won the battle; eight pallets of asparagus were offloaded to make way for his mummies (“I always wondered what happened to that asparagus in the heat…”).

For the National Gallery of Victoria’s head of conservation Michael Varcoe-Cocks, experiences include travelling with a painting in a freighter plane alongside a Melbourne Cup racehorse (as well as goats and “smelly livestock”). For the National Museum of Australia’s head registrar Sara Kelly, art courier dramas range from hand-carrying a rare Islamic pitcher back to Brunei, to following a truck loaded with valuable art in a car with armed guards on the 18-hour journey from Canberra to Queensland (security cars had to be changed at the state border due to laws governing the transportation of guns across state lines).

Earlier this year she transported a shipment of three Papunya drawings in the cargo hold of a plane from Melbourne to the Harvard Art Museums via Hong Kong and Anchorage, followed by a 2am offload in New York and then a four-hour truck ride in the snow to Boston (“you run on adrenalin”).

All three are part of a complex web of gallery and museum staff — couriers, registrars, curators, collections managers and conservators — at the heart of the art transportation and installation world. They work tirelessly behind the scenes — or “behind the Monet”, as the Museum of Contemporary Art’s Charm Watts puts it — in cultural institutions across the country, acting as the gatekeepers, installers and preservers of the art we see on the walls.

They are essentially micro-managing the safe passage of billions of dollars worth of the world’s cultural treasures as they move from point A to point B (and often to several other points on the alphabet in this age of the global blockbuster show). Their remit? Registration to transport to installation: some follow a blockbuster show around the world for years.

Last month Lindsey Breaks, project co-ordinator, international touring exhibitions, at the British Museum, supervised the installation of the BM/BBC show A History of the World in 100 Objects at the NMA in Canberra for the 11th time, “so I know the objects pretty well by now — they feel a bit like my children!”