You are here: Home » Articles filed under: 'News' » Article: 'Mungo Man & Mungo Lady to be reburied' 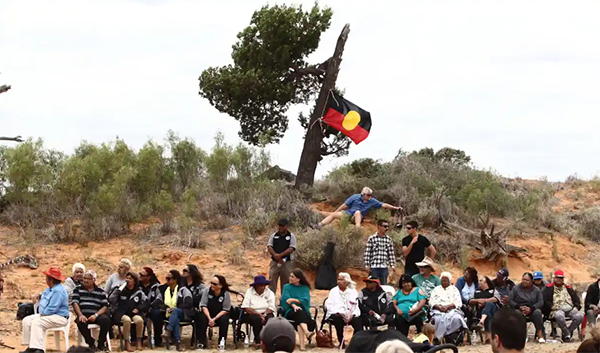 The 42,000-year-old remains of Mungo Man were returned to country in 2017 after being kept by a university and museum for more than 40 years. Photograph: Dean Sewell/The Guardian.

The remains of Mungo Lady, Mungo Man and 106 other ancient Aboriginal people will be reburied in the Willandra Lakes region of New South Wales after a decision by the federal environment minister.

Sussan Ley visited Mungo national park, part of the Willandra world heritage area, on Wednesday to announce the government had approved the reburial.

The remains of Mungo Lady and Mungo Man were discovered in 1968 and 1974, respectively, by geologist Jim Bowler, on the dry bed of Lake Mungo.

At an estimated 42,000 years old, they are the oldest human remains found in Australia, and among the earliest modern humans discovered anywhere in the world.

The burning of Mungo Lady’s body before burial is the oldest known evidence of human cremation. Her remains were returned to Lake Mungo in 1992 and have since been kept in the Mungo national park visitor centre.

After being held for more than 40 years by the Australian National University and then the National Museum of Australia, Mungo Man’s remains were returned in 2017.

Ley ruled last August that a NSW government proposal to rebury the remains of the Mungos and 106 others at 26 unmarked sites would require formal assessment under national environment law.

“Ultimately, what this decision does is respect the wishes of the Aboriginal advisory group who represent the broader tribal groups,” Ley said at an event in Mungo national park on Wednesday.

“I believe this is the best decision in the interests of the Willandra world heritage area,” she said.

The proposal has been controversial, with some traditional owners opposing the reburial. Michael Young, who played a key role in the repatriation of Mungo Man’s remains in 2017, told Guardian Australia the decision had been made without the input of Barkindji people, the majority native title holders.

The Barkindji people hold native title claim to 80% of the land where the remains are set to be reburied.

Young, a Barkindji man and former member of the Willandra AAG, said: “We have not even been included in the process. This is the arrogance of both the federal and the state government.”

“We feel really traumatised by this,” he said. “We have always canvassed the idea of a keeping place … to hold it over for the future generations.”

Ley denied suggestions that the concerns of traditional owners had been ignored.

“Everyone was listened to, everyone was heard,” she said. “Barkindji are represented as one of the three tribal groups on the AAG.” The group also includes Mutthi Mutthi and Ngiyampaa representatives.

Guardian Australia contacted the chair of the Willandra AAG for comment.