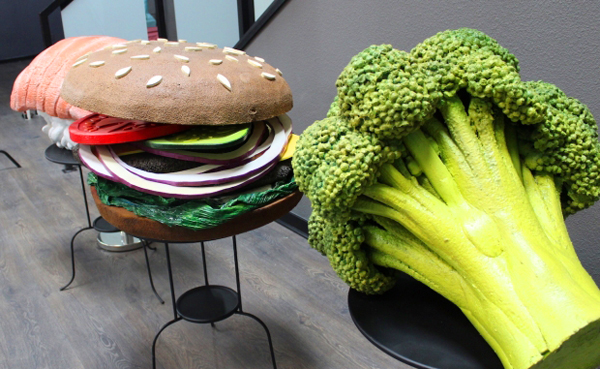 Giant food sculptures on view at the Museum of Selfies (photo by Christine Ro for Hyperallergic).

Mitchell Kuga, How Corporations Harness – and Hijack – the Idea of the Museum, Hyperallergic, 3 April 2018

The trendy adoption of the word “museum” has the potential to undermine the trust placed in cultural institutions, perhaps altering our relationship to culture, art, and commerce in the process.

Once upon a time, museums were repositories for the objects and stories that defined human history. But these days, they are also places to pull out your smartphone and photograph yourself. On Sunday, the Museum of Selfies opened in California. In 2016, the so-called Museum of Ice Cream was one of the most popular selfie spots in the world. And the most Instagrammed restaurant in America, The Sugar Factory, recently announced that it will soon open a Museum of Candy.

For Instagram lovers, these developments may be cause for excitement. But the trendy adoption of the word “museum” has the potential to undermine the trust placed in cultural institutions, perhaps altering our relationship to culture, art, and commerce in the process.

The Museum of Candy, founded by a Kardashian-endorsed restaurant chain with enough capital to lease 30,000 square feet of prime Manhattan real estate, appears to be the largest such project yet. It will be housed in the 19th-century church that became The Limelight, the sprawling Warholian nightclub of the 80s and 90s. In a press release, the Museum of Candy promises plenty of picture-taking opportunities: “the largest selection of candy in the world for museum patrons to photograph, study and most importantly EAT!” Clearly, the organizers were careful to build selfie spots into the space: “Looking to take a picture in the Gumdrop Room, or lose your children temporarily in the candy cane fashion show while you are mesmerized by the candy and gummy bear-making process in the candy café?”

The design of selfie-driven “museums” seems to align with other experiential selfie spots like Color Factory, 29Rooms, and Dream Room. They revolve a highly successful business model: sell tickets for $35 to people itching to Instagram themselves, then immerse them in hyperpigmented landscapes funded by corporate sponsors.

The key difference is  that recently, more and more spaces have been harnessing — or hijacking — the term “museum.” Early selfie-driven museums tended to be temporary projects, often founded by plucky millennials. In 2015, at the Museum of Feelings in New York City, “visitors explored five responsive rooms on an unexpected, immersive journey.” The space was an advertisement for Glade, the maker of bathroom sprays. In 2016, the Museum of Ice Cream was the 10th most instagrammed museum in the world.

The 34-year-old co-founder of the Museum of Selfies, Tommy Honton, said the space hinged on the word museum. “When we got that name, Museum of Selfies, it just hit. You’re going to catch people’s attention immediately with that title,” he told Hyperallergic Honton seemed to relish the potential for controversy. “You’re going to definitely draw ire or support or confusion,” he said. “There are some art magazines that are going to call us the downfall of humankind.”