Six new research projects – including an anti-venom bank and a study of cultural stereotypes on Australian television – have emerged from a new partnership between Museum Victoria and the University of Melbourne.

The McCoy Project was established late last year as a vehicle for funding innovative and high impact research projects. It extends a long history of collaboration between Museum Victoria and the University of Melbourne. Unlike other grant programs, the McCoy Project aims to bring experts from both the sciences and humanities together, creating an environment where research based on Museum Victoria’s collections can flourish.

Under the first initiative of the McCoy Project announced on 28 January, seed funding was awarded for six collaborative pilot projects to be run during 2014:

The McCoy Project takes its name from Frederick McCoy, one of the four founding professors of the university. He was also appointed as honorary Director of the Museums of Natural and Applied Sciences (a predecessor of Museum Victoria) in 1857. They were positions he held until his death in 1899.

McCoy was a leading proponent of research and developing collections across both the museum and university, hence the choice of his name to entitle the new collaboration between the two institutions today.

The next stages of the McCoy Project will see other major research initiatives announced during 2014, and further seed funding provided in 2015 and 2016. 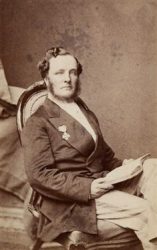 Portrait of Sir Frederick McCoy, c.1870, namesake of the McCoy Project Image: Johnstone, O'Shannessy & Co. Source: State Library of Victoria
Positions Vacant » View All
» Kaituhi Maori / Maori writer – Te Papa
» Interpretive Planner – AWMM
Latest News » View All
Powerhouse’s 5 new exhibitions
Eucalyptusdom to Electric Keys Read more.
10 new art museums
Opening globally in 2022 Read more.
“Activating Smithsonian Open Access”
- new models for interacting with collns Read more.
Outback Museum of Australia, Charleville
$8.34M through in Building Better Regions Read more.
British museums face long Covid’s effects
visitation halves from pre-pandemic levels Read more.
Top +
Council of Australasian Museum Directors, c/o Ms Daryl Karp, Museum of Australian Democracy at Old Parliament House PO Box 3934 Manuka, Australian Capital Territory 2603 Australia, © CAMD 2021
Copyright: All information and resources provided on this website remain the copyright of the Council of Australasian Museum Directors. Permission is granted for viewing and downloading for personal and not for profit purposes. Those wishing to reproduce any materials for commercial, educational or other uses are requested to contact us.
Disclaimer: The content of this website is provided for information purposes only and is not intended as a substitute for professional advice. No claim is made as to the accuracy or authenticity of the content of the website. The Council of Australasian Museum Directors does not accept any liability to any person for the information or advice (or the use of such information or advice) which is provided on this website. The information on our website is provided on the basis that all persons accessing the site undertake responsibility for assessing the relevance and accuracy of its content. No responsibility is taken for any information or services which may appear on any linked web sites. Hostgator.
.