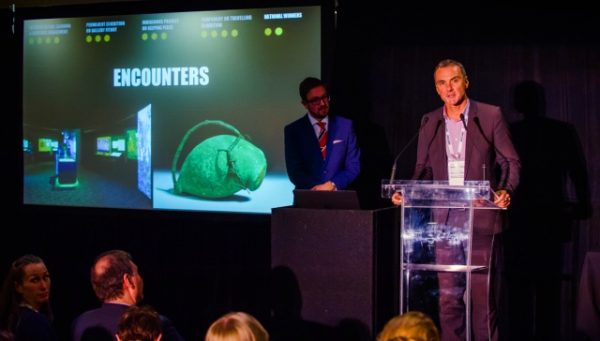 Meredith Foley, Awards at the Museum Australasia Joint Conference, 29 May 2016

Congratulations to CAMD member, the National Museum of Australia, which shared the position of National Winner in the MAGNA Awards at the recent Museum Australasia Joint Conference held in May in Auckland.

The MAGNAs recognise excellent work nationally in the categories of exhibition, public programs and sustainability projects.

The NMA won its award in the Exhibitions category for Encounters: Revealing stories of Aboriginal and Torres Strait Islander objects from the British Museum.

Appears to have strong community consultation and sought out cultural knowledge holders’ views. Strong awareness of issues involved and courage in creating a “safe space” for difficult/dangerous ideas/issues. Great exhibition design – central fish-trap architectural motif provided binding structure – evocative circular arrangements of displays with multilevel text/information and technology. Great transparency of information – more so than most exhibitions – demonstrates commitment to the values and aims of the exhibition and the process of developing/strengthening a significant relationship with a world museum. Where to from here? This is an important conversation … where will this lead?

The prize was shared with the Murray Art Museum Albury for MAMA.

Other CAMD members took out awards in the Interpretation, Learning and Audience Engagement category:

For Permanent Exhibitions or Gallery Fitouts the Australian National Maritime Museum was highly commended for the Action Stations Experience and in Temporary or Travelling Exhibitions the Australian Centre for the Moving Image was Highly Commended (Project budget $20,000 – $150,000) for Orry-Kelly: Dressing Hollywood as was the Museum of Australian Democracy for Pop-Up PLAY UP.

The Level 3 winner in Temporary or Travelling Exhibitions was the Australian Museum’s Trailblazers: Australia’s 50 greatest explorers’s Exhibition while the Level 4 winner, as mentioned above was the NMA with Encounters.

The MAPDAs celebrate excellence in design and communication in the museum and collections sector across Australia.  Congratulations to the Australian Centre for the Moving Image (ACMI) which shared a win for its Invitation David Bowie Is.

ACMI also had wins with its Exhibition Branding Package and the Poster for the Julian Rosefeldt Manifesto and in the Multimedia category for Manifesto Video Teasers.  It also picked up a Highly Commended for its Jim Henson: Muppets Music and Magic in the Poster category.

The Australian National Maritime Museum shared a win with ACMI for its Invitation for Shackleton: Escape from Antartica and its Program Website for Action Stations while the Australian War Memorial was also a winner with its Exhibition Branding Package for the AWM First World War Gallery.

The full list of MAGNA awards are available here and the MAPA awards here.

Otago Museum won the Metropolitan Taonga Māori Award for the exhibition Hākui: Women of Kāi Tahu, its Beautiful Science gallery – which lets people explore science, seasons and landscapes using laser-activated technology – won the Metropolitan Science & Technology Award and its new planetarium won the Philips Selecon special award. Judges described the science gallery as: “Beautiful and exquisite, this exhibition is about Otago Peninsula in all its glory.”

“Otago Museum brought the academic science community to the local community, delivering a stunning exhibition on all levels. This addition to Otago Museum is an exceptional example of art and science coming together on a magnificent scale.”

Auckland War Memorial Museum also took out two award categories, winning Best Museum Visitor Experience for Gallipoli in Minecraft and being named joint winner in the Metropolitan Social History category for its Taku Tāmaki exhibition and programme. Te Papa was joint winner for Gallipoli: The scale of our war, co-created with Weta Workshop.

The second award category which covers an initiative/project that strengthens museum relations internationally went to the National Museum of Australia’s Encounter team for their work with the British Museum.