Work at the Western Australian Museum’s recently acquired DNA laboratory has proved conclusively the Night Parrot – often referred to as the Holy Grail of ornithology – is not extinct.

Queensland bird enthusiast John Young, who has been searching for the Night Parrot (Pezoporus occidentalis) for nearly 15 years, sent five feathers from a roost site he found within the Lake Eyre Basin to the Museum’s Molecular Systematics Unit for testing, convinced the birds he had been watching were indeed the elusive parrot.

The feathers were found to be 100 per cent identical to Pezoporus occidentalis, listed as extinct in New South Wales, regionally extinct in Victoria, critically endangered in Western Australia and the Northern Territory, and endangered in Queensland and South Australia.

WA Museum CEO Alec Coles said this was an incredibly significant discovery and one the Museum was very excited to be part of.

“The Night Parrot is a bird many people believed to be extinct up until 1990, and the WA Museum is very pleased to have been asked to authenticate its existence,” Mr Coles said.

Mr Young said having them authenticated beyond a shadow of a doubt was the realisation of a dream and the start of a whole new project.

“I’ve been tracking these birds for nearly 15 years and I’ve only ever seen them three times, never before have I been able to get the evidence that would conclusively prove I’d actually found them,” Mr Young said.

“Now that I have, I want to help protect them and, in keeping with the wishes of the property owner, I cannot reveal where I found them but hope in the future, when another site is found, to be able to share the knowledge with others. For me this is just the beginning – I now want to study their habits, film the complete biology of the bird, and do what we can to look after them.”

The Night Parrot is a medium-sized parrot measuring up to 25cm in length and is predominantly bright green in colour with black and yellow bars, spots and streaks over the body, bright yellow on the belly and vent, and black on the upper surfaces of the wing and tail tips. When on the ground it hops, much like a kangaroo.

Confirmed records of the Night Parrot are limited and most were collected in the late 1800s. Just 24 specimens exist in museum collections. There have been little more than a dozen sightings this Century, and only one since 1990. While so little is known about the species that numbers are difficult to estimate, it is thought there may be as few as 50 breeding pairs left in the wild. There are no Night Parrots in captivity. 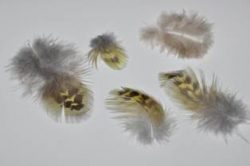 Night Parrot feathers
Positions Vacant » View All
» Exhibition Experience Developer – Te Papa
» Operations & Science Centre Mgr – Otago Museum
Latest News » View All
MA Museums Change Lives Awards
2021 Shortlist announced Read more.
Tattooing as a cultural phenomenon & art
form – historic & current challenges Read more.
Oriel College’s retain & explain plaque for
Cecil Rhodes statue – what’s balance? Read more.
City of London to retain & explain statues
- Guildhall’s slave trader policy reversal Read more.
What to do if you find fossils or artefacts
A history worth protecting Read more.
Top +
Council of Australasian Museum Directors, c/o Ms Daryl Karp, Museum of Australian Democracy at Old Parliament House PO Box 3934 Manuka, Australian Capital Territory 2603 Australia, © CAMD 2021
Copyright: All information and resources provided on this website remain the copyright of the Council of Australasian Museum Directors. Permission is granted for viewing and downloading for personal and not for profit purposes. Those wishing to reproduce any materials for commercial, educational or other uses are requested to contact us.
Disclaimer: The content of this website is provided for information purposes only and is not intended as a substitute for professional advice. No claim is made as to the accuracy or authenticity of the content of the website. The Council of Australasian Museum Directors does not accept any liability to any person for the information or advice (or the use of such information or advice) which is provided on this website. The information on our website is provided on the basis that all persons accessing the site undertake responsibility for assessing the relevance and accuracy of its content. No responsibility is taken for any information or services which may appear on any linked web sites. Hostgator.
.