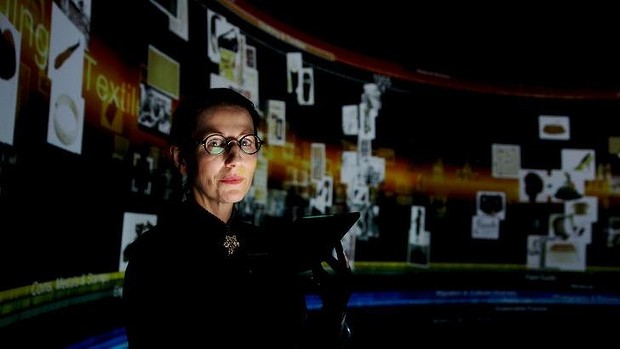 360 degree data-browser: Professor Sarah Kenderdine has developed an interactive digital browser for Museum Victoria allowing 80,000 previously unseen objects in the Museum’s collection to be viewed by museum visitors. The data-browser is the first of its kind in the world. Source: SMH. Photo: Edwina Pickles

Cutting edge technology has come to the rescue of Australia’s hidden treasures, with an interactive cinema developed by the University of NSW to place on public display hundreds of thousands of photographs, cards and artifacts “lost” in museum collections.

With a mini tablet and 3-D glasses, visitors will be able to enter a giant cinema-in-the-round, dubbed the Tardis, to burrow through gallery and museum collections hardly seen by the public.

The physical effect is akin to standing in the centre of the shared virtual entity known in computing as the cloud, where networked information can be retrieved and visitors take themselves on a serendipitous journey of discovery through the network of linked information.

The digital browser was developed by the Museum Victoria and researchers at the UNSW iCinema Research Centre and is funded by the Australian Research Council. The design of the browser was led by Professor Sarah Kenderdine from the university’s department of Art & Design and the museum’s Tim Hart, and will be installed later this year.

Hailed by the university as the first of its kind in the world, this immersive cinematic experience has the potential to revolutionise traditional gallery going and museum practices.

At Museum Victoria where only a fraction of the collection is on display, museum visitors will be able to access the “storehouse and explore freely this wonderland of objects”, says Professor Kenderdine. “It’s like being in the Matrix!”

Professor Kenderdine says mARChive represents a technological and conceptual leap on the interactive microtile wall display installed in 2013 at the Cleveland Museum of Art which reproduces only 3000 images archived objects and was, until now, considered a model for future gallery displays.

The mARChive experience is one of immersion, movement, and a feeling of wonder as users explore and follow objects thematically and temporally. The connections between objects are made by description and metadata in the museum’s collection management system, says Professor Kenderdine.

For the visitor, it conveys the sense of scale and amazement at the scope and size of large museum collections, usually for the first time, a realisation similar to the final scene of Raiders of the Lost Ark. The Ark of the Covenant is lost/stored in a warehouse and the camera pans over the enormous pile of like-sized wooden crates. mARChive allows visitors to open up the crates to reveal the treasures inside.

The browser is organised along eighteen themes from armour to leisure to natural science and Indigenous collections. This rich data is combined with an ever changing soundtrack made from the audio archives of the museum, among other sources.

While museums and galleries have been busy placing a sizeable portion of their collections on the internet, this is a genuinely immersive experience in which visitors are the drivers of their own experience and creators of their own narrative emerging from the collections, says Professor Kenderdine.

Museum Victoria’s director of Public Engagement, Tim Hart, says the museum currently displays less than one per cent of its 17 million items acquired over 150 years.

Stored across three sites are significant collections of Australian indigenous cultural artifacts, an extensive natural science collection of animals, rocks, minerals and fossils and a collection unique to Victoria’s historical and technological developments. It has the body of Phar Lap on display. The extent of the museum’s collection was “mindboggling”.

“This will enable visitors to make their own serendipitous journeys through the collections,” says Mr Hart. “You know, it is a little like Alice in Wonderland going down the burrow, you find more and more as you drill down.”

The next step, says Mr Hart, will see visitors complete brief survey forms to preorder information of interest, be it World War I or some other topic. “We will definitely be applying for more research funding.”

It is one of nine interactive large screen display systems that have been built. Professor Kenderdine and Museum Victoria are in the early stages of developing a world travelling exhibition, Illuminating Asia, a virtual tour of Asian art and cultural heritage down the centuries using these nine displays. “It’s a block buster which will tour major museums in China, Europe and North America. It will change the nature of museum-going experience forever.”

To view Professor Kenderdine demonstrating the digital cinema click here.
Positions Vacant » View All
» Exhibition Experience Developer – Te Papa
» Operations & Science Centre Mgr – Otago Museum
Latest News » View All
MA Museums Change Lives Awards
2021 Shortlist announced Read more.
Tattooing as a cultural phenomenon & art
form – historic & current challenges Read more.
Oriel College’s retain & explain plaque for
Cecil Rhodes statue – what’s balance? Read more.
City of London to retain & explain statues
- Guildhall’s slave trader policy reversal Read more.
What to do if you find fossils or artefacts
A history worth protecting Read more.
Top +
Council of Australasian Museum Directors, c/o Ms Daryl Karp, Museum of Australian Democracy at Old Parliament House PO Box 3934 Manuka, Australian Capital Territory 2603 Australia, © CAMD 2021
Copyright: All information and resources provided on this website remain the copyright of the Council of Australasian Museum Directors. Permission is granted for viewing and downloading for personal and not for profit purposes. Those wishing to reproduce any materials for commercial, educational or other uses are requested to contact us.
Disclaimer: The content of this website is provided for information purposes only and is not intended as a substitute for professional advice. No claim is made as to the accuracy or authenticity of the content of the website. The Council of Australasian Museum Directors does not accept any liability to any person for the information or advice (or the use of such information or advice) which is provided on this website. The information on our website is provided on the basis that all persons accessing the site undertake responsibility for assessing the relevance and accuracy of its content. No responsibility is taken for any information or services which may appear on any linked web sites. Hostgator.
.