Auckland War Memorial Museum is well ahead of projected sustainability targets with the announcement it’s reduced its carbon emissions by 50% since the organization began monitoring its footprint three years ago. This means nearly 1000 tonnes of carbon emissions are not entering the atmosphere every year due to the Museum’s efforts.

The savings were achieved through improvements in heating, ventilation and cooling systems in the building, which has cut consumption of natural gas (by 63%) and electricity (by 36%). Other contributors were increased recycling by the public and staff, reduced air travel by staff and use of more energy efficient LED lighting.

The Museum’s annual energy savings will exceed $400,000 by the year’s end. Cumulative savings over three years will near $900,000. These savings have been redirected into ensuring that the Museum is able to align itself to the Auckland Plan and extend its reach to an ever increasingly diverse Auckland – onsite, offsite and online.

“The Museum set ambitious sustainability goals back in 2010 and have pushed these goals higher year after year,” says Auckland Museum Director, Roy Clare.

“I am extremely proud of the work our people and our partners have done to both meet and exceed these goals. Despite this, we don’t intend to sit and pat ourselves on the back. Our next venture is in solar energy and thanks to a partnership with Meridian Energy we will be installing solar panels on the Museum’s roof by May,” continues Mr Clare.

“The opportunity for solar power opens up a whole new renewable energy chapter for the Museum,” he says. “It enables us to take the next step towards our goal of ensuring environmental sustainability through adopting green building innovations.”

Auckland Mayor Len Brown has congratulated the Museum on its sustainability achievements, saying: “reducing carbon emissions is an important environmental goal and one that will help us make Auckland the world’s most liveable city. I applaud the leadership role being taken by the Museum and hope it will motivate other organizations in Auckland.”

Installing solar panels brings with it the opportunity for the Museum to educate others, through outreach to communities and school children, both physically and online.

In honour of its 50% reduction and to show its support for Earth Hour 2014, the Museum will turn its exterior lights off on Saturday 29 March between 8.30pm -9.30pm, and then be illuminated in green light for the remainder of the night.

• total physical waste to landfill has reduced by 61%

• more than 100,000 kilograms of mixed waste has been diverted away from landfills and either recycled or re-purposed

• natural gas consumption has reduced by 63%

• electricity consumption has reduced by 36%

Sustainability is a core objective within Future Museum – the Museum’s 20-year strategic plan. You can read the e-book here.

The results of the Museum’s emissions reductions are independently certified by CEMARS® (Certified Emissions Measurement And Reduction Scheme), run by carboNZeroCertTM Holdings, a wholly owned subsidiary of Landcare Research. CEMARS certification confirms measurement of greenhouse gas emissions in compliance with ISO14064-1, the international standard for quantifying and reporting an organization’s carbon footprint. It also certifies that plans are in place to reduce emissions. In 2011 Auckland Museum became the first museum in the world to gain CEMARS certification. 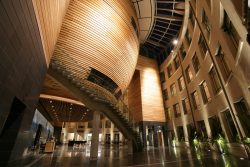 Atrium in Auckland Museum Source: Auckland War Memorial Museum
Positions Vacant » View All
» Kaituhi Maori / Maori writer – Te Papa
» Interpretive Planner – AWMM
Latest News » View All
Powerhouse’s 5 new exhibitions
Eucalyptusdom to Electric Keys Read more.
10 new art museums
Opening globally in 2022 Read more.
“Activating Smithsonian Open Access”
- new models for interacting with collns Read more.
Outback Museum of Australia, Charleville
$8.34M through in Building Better Regions Read more.
British museums face long Covid’s effects
visitation halves from pre-pandemic levels Read more.
Top +
Council of Australasian Museum Directors, c/o Ms Daryl Karp, Museum of Australian Democracy at Old Parliament House PO Box 3934 Manuka, Australian Capital Territory 2603 Australia, © CAMD 2021
Copyright: All information and resources provided on this website remain the copyright of the Council of Australasian Museum Directors. Permission is granted for viewing and downloading for personal and not for profit purposes. Those wishing to reproduce any materials for commercial, educational or other uses are requested to contact us.
Disclaimer: The content of this website is provided for information purposes only and is not intended as a substitute for professional advice. No claim is made as to the accuracy or authenticity of the content of the website. The Council of Australasian Museum Directors does not accept any liability to any person for the information or advice (or the use of such information or advice) which is provided on this website. The information on our website is provided on the basis that all persons accessing the site undertake responsibility for assessing the relevance and accuracy of its content. No responsibility is taken for any information or services which may appear on any linked web sites. Hostgator.
.