It’s not often you see the words “exquisite” and “corpse” used together but it was the perfect title for Sharon McKenzie’s series of eye-catching artwork.

Using taxidermy specimens of endangered animals as her muse, the Ipswich artist created a masterpiece that has taken out the top gong at this year’s Queensland Regional Art Awards.

The detailed artwork was made with the use of fine point pens and was featured in an earlier exhibition at the Ipswich Community Gallery in July.

She said the14-piece display showcased the endangered and vulnerable animal species within the region.

“I was allowed to work at the Queensland Museum’s taxidermy studios where I had access to the animal specimens I wanted to sketch,” Ms McKenzie said.

“The project took about eight months to complete…I went through a lot of pens and had some very sore hands by the end of it.”

At the QRA awards, Ms McKenzie’s submission won the Wayne Kratzmann Award, which came with a $10,000 acquisitive art prize and a funded residency in Brisbane.

Her artwork will also be part of a touring exhibition called Vital Signs, which will be displayed at key centres across Queensland in 2015.

Ms McKenzie said she was delighted that her work was about to get more exposure, not only from an artist’s point of view but from a conservationist viewpoint.

“When I held the exhibition at Ipswich, it was wonderful to see so many viewers take an interest in the animals on show,” she said.

“Since the artwork will now be featured in Vital Signs, it will help promote further awareness.”

In addition to Ms McKenzie two other Ipswich artists; Donna Davis and LeAnne Vincent were also selected to have their work displayed in the exhibition.

Ms McKenzie, who has been an artist-in-residence at The Old Courthouse for the past few years, said it was amazing to have so much local talent represented in the tour.

“It advocates Ipswich as being a growing art community,” she said.

The Queensland Regional Art Awards is an annual visual arts prize and exhibition for established and emerging artists living in regional and remote Queensland. 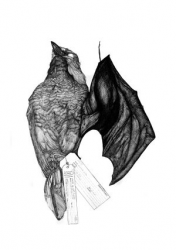 Sharon McKenzie's artwork ' Exquisite Corpse' won the prestigious Wayne Kratzmann Award. Photo: Leanne Vincent
Positions Vacant » View All
» Kaituhi Maori / Maori writer – Te Papa
» Interpretive Planner – AWMM
Latest News » View All
Powerhouse’s 5 new exhibitions
Eucalyptusdom to Electric Keys Read more.
10 new art museums
Opening globally in 2022 Read more.
“Activating Smithsonian Open Access”
- new models for interacting with collns Read more.
Outback Museum of Australia, Charleville
$8.34M through in Building Better Regions Read more.
British museums face long Covid’s effects
visitation halves from pre-pandemic levels Read more.
Top +
Council of Australasian Museum Directors, c/o Ms Daryl Karp, Museum of Australian Democracy at Old Parliament House PO Box 3934 Manuka, Australian Capital Territory 2603 Australia, © CAMD 2021
Copyright: All information and resources provided on this website remain the copyright of the Council of Australasian Museum Directors. Permission is granted for viewing and downloading for personal and not for profit purposes. Those wishing to reproduce any materials for commercial, educational or other uses are requested to contact us.
Disclaimer: The content of this website is provided for information purposes only and is not intended as a substitute for professional advice. No claim is made as to the accuracy or authenticity of the content of the website. The Council of Australasian Museum Directors does not accept any liability to any person for the information or advice (or the use of such information or advice) which is provided on this website. The information on our website is provided on the basis that all persons accessing the site undertake responsibility for assessing the relevance and accuracy of its content. No responsibility is taken for any information or services which may appear on any linked web sites. Hostgator.
.