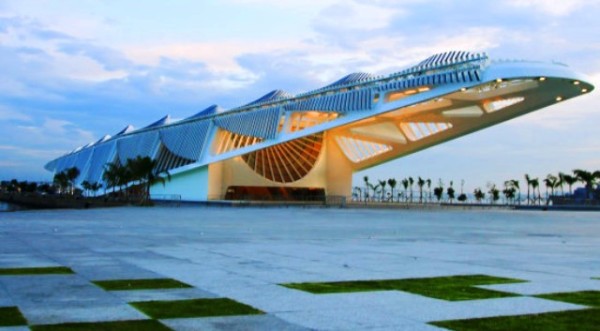 It’s a bird, it’s a plane…. it’s a soaring, white Calatrava design in Rio de Janeiro. The Museu do Amanhã (The Museum of Tomorrow) opens December 18 on Maua Pier in the up-and-coming Puerto Maravilha neighborhood.

Inspired by the endemic Carioca culture, “The idea is that the building feels ethereal, almost floating on the sea, like a ship, a bird or a plant. Because of the changing nature of the exhibits, we have introduced an archetypal structure inside the building. This simplicity allows for the functional versatility of the museum, able to accommodate conferences or act as a research space,” Santiago Calatrava said in a press release.

The 5,3820-square-foot structure is surrounded by an additional 8,1806-square-foot plaza that wraps around and extends out to the water, connecting it to the Guanabara Bay. A cantilevered roof extends into 246- and 148-foot-long overhangs facing the square and the bay respectively. Constructed in relation to the nearby UNESCO World Heritage Sao Bento Monastery, the height of the building was capped at 32 feet to protect the view monastery’s views of the surrounding landscape. In the museum, Calatrava created multiple opportunities for panoramic views of the monastery.

The Museu do Amanhã is oriented on a north-south axis to create additional outdoor space along the pier for gardens, paths, green spaces, and a reflection pool. The pool will be used to filter water that is pumped in from the bay and then released back in. Water from the bay will also be used to regulate the building’s temperature, while solar panels will generate energy for the museum.

A permanent exhibition, located on the second floor, will be curated by physicist and cosmologist Luiz Alberto Oliveira and designed by Ralph Appelbaum with Andrés Clerici. In addition, there will be temporary exhibitions, a 400-seat auditorium, a cafe, a restaurant, a gift shop, an educational lab, and the Observatory of Tomorrow, which will be a place for technological and scientific research.

“The city of Rio de Janeiro is setting an example to the world of how to recover quality urban spaces through drastic intervention and the creation of cultural facilities,” Calatrava said in a press release.