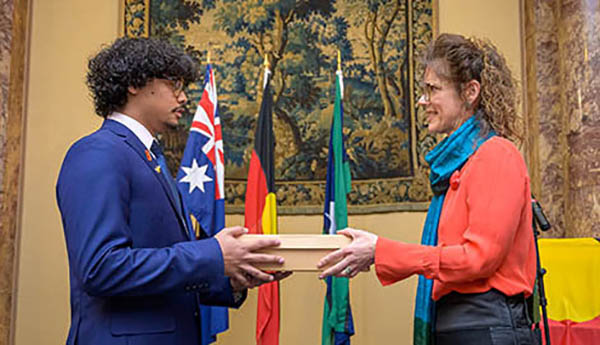 Over the past 18 months, the repatriation of cultural heritage has become part of an international conversation that shows no signs of stopping. The publication of the Sarr-Savoy report in France propelled what had been a largely internal museum sector debate into the wider public consciousness, leaving some institutions scrambling to keep pace with fast-changing attitudes.

Last month, that conversation – which had been largely theoretical in the UK thus far – changed from words to deeds, as Manchester Museum held a ceremony to return 18 secret, sacred and/or ceremonial items to two First Nations communities in Australia: the Gangalidda Garawa and Nyamal peoples. A second ceremony will be held in February to repatriate a further 25 artefacts to the Yawuru and Aranda communities.

The University of Cambridge has also announced that it will repatriate the okukor, a bronze cockerel, to the royal family in Benin City, Nigeria. The cockerel is a Benin bronze, one of hundreds of intricate bronze artefacts looted by UK troops from Nigeria in the punitive Benin Expedition of 1897.

These developments are groundbreaking for a number of reasons. The repatriation of the okukor, which has no specific date as yet, will mark the first time a Benin bronze has been returned to Nigeria by a major UK institution. It comes after pressure from student activists in the Cambridge University Black and Minority Ethnic Campaign.

And although many UK museums have been repatriating of human remains for some years, the return of sacred ceremonial items to Australia is another first for the sector. The repatriation was initiated by the Australian Institute of Aboriginal and Torres Strait Islander Studies, which approached several museums in the UK ahead of the 250th anniversary of Captain Cook’s arrival in Australia in 2020. In a further step forward, the objects have been returned directly to their communities of origin without precondition; they will now be put back to use in the ceremonial rituals for which they were first created.

“It was a remarkable experience,” says Stephen Welsh, the curator of living cultures at Manchester Museum, of the repatriation process. The museum hosted two representatives from the First Nations communities for a week ahead of the handover ceremony itself. “It was an absolute privilege to have them explain to us the significance of the objects and what it meant to the communities in terms of reconciliation and healing.”

In a statement following the handover, Gangalidda Garawa representative Mangubadijarri Yanner said: “This, to me and my community, what true practical reconciliation looks like. I am honoured to have the opportunity to carry on the work of my ancestors by bringing our sacred cultural heritage items and artefacts back to country where they belong.”

This momentum towards repatriation isn’t universally welcomed within the UK museum sector however. The writer and cultural commentator, Tiffany Jenkins, recently told the Telegraph: “Museums should not be used for political battles, or for a contemporary culture war. A lot of people seem to think that by returning artefacts they can somehow atone for the past”. And in a statement last year, the Victoria and Albert Museum’s director Tristram Hunt famously warned that to “decolonise is to decontextualise”.

Welsh strongly disagrees with this viewpoint: “I think it’s quite the opposite. We’re engaging with indigenous communities in a process of intercultural dialogue and acknowledgement of trauma. We can begin to explore with them the impact that colonial rule had on their culture and that enhances our understanding [of our own history]. It’s not about what you lose, it’s what you gain.”

For now, the latter argument is in ascendance among many museum professionals. There is a “general groundswell” of support for repatriation among curators of world cultures in the UK, says Welsh – exemplified in a statement recently released by the Museum Ethnographers Group in support of the move. “Museums are ready to do it and they want to do it.”

Others sound a note of caution, however. “A lot of this is now coming within the reach of international politics,” says Neil Curtis, head of museums and special collections at the University of Aberdeen, and a member of the Museums Association’s working group on decolonisation. This means that in some cases repatriation is being pursued for geopolitical motivations rather than the needs of source communities, he believes.

“My concern is that the original collecting took place when we in the west decided that we want the stuff here, and now we’re deciding that we will send it back. It’s still a rather colonial attitude.”

Repatriation is also a costly process and there’s little cash to spare within the museum sector, meaning that institutions and communities of origin often need to rely on government funding – a drawback that gives politicians the freedom to cherry-pick politically expedient cases.

“The strength and justice of a claim and the ability to pursue it are still very disconnected,” says Curtis, who warns that “museums are being set up to fail” because they lack the ability to deal with claims fairly. In the US, the Open Society recently launched a four-year $15m fund to help return cultural objects to African nations – but there is no similar independent fund on the horizon in the UK.

Curtis does agree however that there has been a significant change in tone among British museums on the issue. “The institutions that you might have expected to say no in the past are now being a lot cagier,” he says. “Now it’s: ‘we think that repatriation is a good thing, with caveats’, rather than ‘we think it’s something that shouldn’t happen, with exceptions’.”