You are here: Home » Articles filed under: 'News' » Article: 'Museum of many firsts'

Museum of many firsts 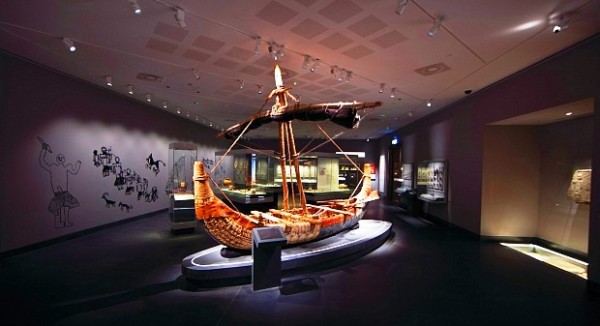 Replica of a reed-built dhow in the Prehistory and Ancient History Gallery of the National Museum of Oman. Source: The Art Newspaper.

Anny Shaw, A museum of many firsts in Muscat spans two million years of Omani history, The Art Newspaper, 16 February 2016

The National Museum of Oman, which is due to open in the Arab state’s capital of Muscat in April, is a museum of many firsts. Located opposite the royal Qasr al-Alam Palace, it houses a 7,000-strong collection of objects spanning two million years, most of which have never been shown. The project cost around OMR40m (€95m).

The objects range from city maps and manuscripts to life-size replicas of ships, and from weaponry to models of castles and forts. Most come from the Ministry of Heritage and Culture. The museum also commissioned craftspeople across the sultanate to create new works and will present long-term loans from the Victoria and Albert Museum and the Science Museum, both in London.

The aim is to re-create the key events in the history of Oman through artefacts and state-of-the-art technology. The museum will have 43 interactive media stations, including an “interactive smell device” that allows visitors to experience Omani incense.

“The National Museum is the first museum project in Oman to meet Icom standards,” says Jamal al-Moosawi, the acting director-general at the museum. The institution also boasts the first ultra-high definition cinema facility in Oman, the first education centre inside a museum in the country and the first specialist conservation studio in the state. It is also the first museum in the Middle East to adopt Arabic braille for the visually impaired.