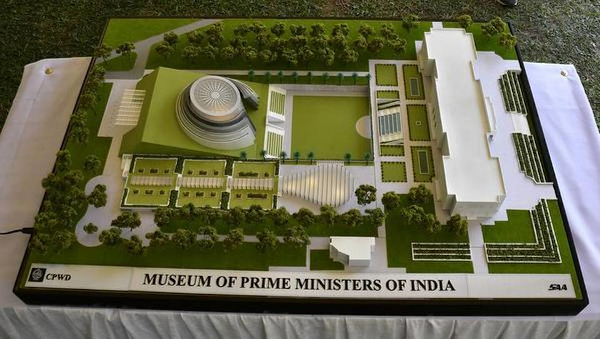 Model of the proposed Museum for all PMs on the premises of the Teen Murti in New Delhi.

Construction of the Centre’s proposed Museum on Prime Ministers, which was supposed to open in October this year, is likely to be completed by November due to the lack of workers during the COVID-19 crisis, said sources involved in the project.

The museum is being developed at the Teen Murti Estate that houses the Nehru Memorial Museum and Library (NMML) by the Central Public Works Department (CPWD). According to a CPWD official, the construction of the building, electrical work and exterior driveways would be completed by November. Last year, the CPWD had set March 2020 as the deadline for the project. The official said the CPWD was hoping to hand over the completed building to the NMML by November, after which it would take a few months’ time for putting up the exhibits on all Prime Ministers.

The NMML, an autonomous institution operating under the Union Ministry of Culture, is in the process of selecting agencies to develop audio-visual content, running a cafe and souvenir shop, and carrying out branding, marketing and online services related to the PMs’ museum.

On June 6, the NMML had issued a tender seeking bids for developing the audio-visual content. Seven companies had applied for the project, for which financial bids are scheduled to be opened on Monday, according to the NMML’s online tender portal.

While seeking bids, the NMML said, “The prime objective of the museum is to provide the visitors a better understanding of, and create curiosity amongst them about the different individuals who have occupied the office of Prime Minister, their individual personalities and contributions as Prime Ministers, as well about the institution of the Prime Minister.”

Spread over about 10,000 square meters, the museum would have 3D and touch-enabled displays, audio-visual projection, hologram and other state-of-the-art as well as conventional exhibits, NMML said. It added that the total project cost was ₹226.20 crore.