You are here: Home » Articles filed under: 'News' » Article: 'Museum of Tomorrow' 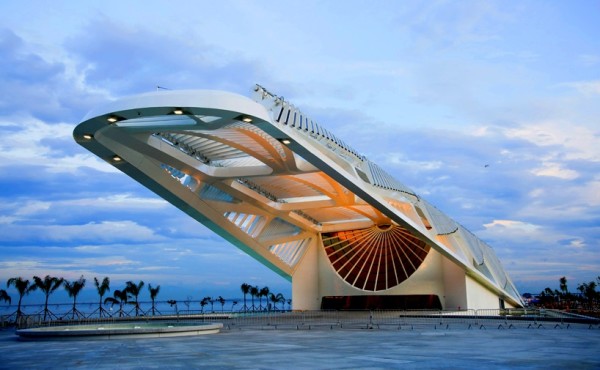 The ambitious museum looks at where humankind is headed—and asks how they’ll live in a post-climate-change world.

A new sentry stands guard on Rio de Janeiro’s harbor: a white, beamed canopy that rises from the ground and points toward the sky—and the future. The Museum of Tomorrow‘s intricate architecture moves with the sun, morphing and changing all day long. And inside this innovative building lies something even more dynamic—a futuristic science museum that looks decades ahead and was specifically designed to elicit an emotional response.

This museum for a new generation doesn’t contain any historical artifacts or meditations on how people in the past lived and survived, aside from quick multimedia overviews of how humans came to exist on Earth. What it holds is far more important to the future world: exhibits showing the effects of humans on the planet and what Earth might look like 50 or more years down the road. Each installation incorporates scientist-outlined visions of where the planet is headed in regard to climate change, population size, lifespan, technology, biodiversity and cultural integration—and points to the possibility of a more sustainable future. The museum leads visitors on a journey through five distinct sections. Each attempts to answer a fundamental question: “Who are we? Where do we come from? Where are we now? Where are we headed to? And how do we want to get there?”

It’s a complex—and interactive—journey. In Cosmos, visitors lay back to face a movie screen for a short video about Earth’s geology and evolution. In the Earth portion, they investigate three large cubes to learn about where human beings came from. The first contains an installation showing two tangled scarves dancing on wind, meant to represent matter in flux. The next cube revolves around DNA, and the last investigates culture and relationships through 1,200 images.