You are here: Home » Articles filed under: 'News' » Article: 'Museum or dumpster?' 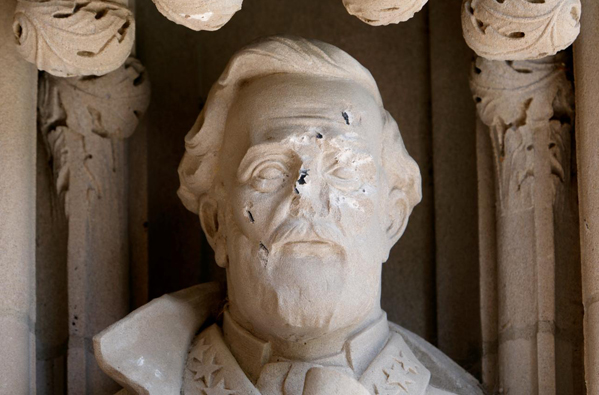 (Reuters) – As communities across the United States redouble efforts to remove Confederate monuments from public spaces after a far-right rally in Virginia turned deadly, city leaders now face another conundrum: what to do with the statues.

President Donald Trump described them on Thursday as “beautiful statues and monuments,” part of the history and culture of the country that will be “greatly missed.”

But they are seen by many Americans as symbols of racism and glorifications of the Confederate defense of slavery in the Civil War, fueling the debate over race and politics in America.

Cities are speeding up their removal since Saturday’s rally in Charlottesville, Virginia, where a suspected white supremacist crashed a car into a crowd, killing one woman, during protests against the removal of a statue of Robert E. Lee, who headed the Confederate army in the American Civil War.

Since Monday, officials in Baltimore and Gainesville, Florida, have taken down statues while another was torn from its plinth by protesters in Durham, North Carolina. Calls for more to be removed have grown louder.

This has created an additional headache for cities and spurred another debate: how to dispose of the statues once they are taken down.

Some have suggested museums, others putting them in Confederate cemeteries and one city councilman proposed using their metal to make likenesses of civil rights leaders.

“Melting them down and using the materials to make monuments for Frederick Douglass, Thurgood Marshall, Harriet Tubman would be powerful!” Baltimore city councilman Brandon Scott wrote on Twitter this week. The mayor’s office said that was unlikely.

The debate contrasts sharply with how Eastern Europe handled thousands of statues following the collapse of Communism in the late 1980s and early 1990s. Often pulled down by angry mobs, some of the statues ended up in dumpsters and others in museums to teach people the evils of totalitarian regimes. In Budapest, a for-profit park hosts about 40 statues of communist heroes such as Karl Marx.

In the U.S. South, the debate still rages between those nostalgic for the past and those who view the monuments as painful reminders of slavery.

There are more than 700 Confederate statues in the United States according to the Southern Poverty Law Center, most of them created in the 1910s and 1920s, decades after the Civil War ended. They were intended to reassert the power of white people, said Jonathan Leib, Chair of Political Science and Geography at Old Dominion University in Virginia.

“They’re visible, tangible expressions of power,” he said on Thursday.

In Birmingham, Alabama, Mayor William Bell ordered workers to hide a Confederate statue behind plywood boards, while the city challenges a state law banning the removal of such monuments.