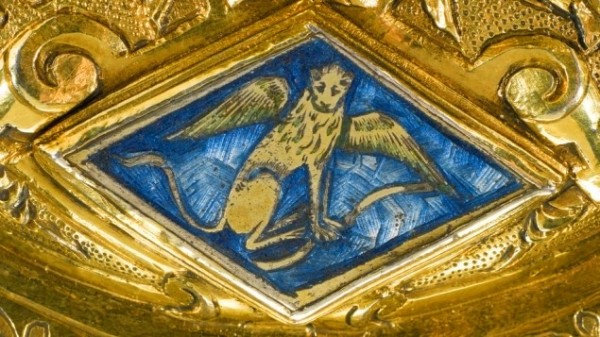 Detail from a salt cellar dating back to 1560, that was returned to the heirs of a Jewish couple who owned it before it was looted by the Nazis. Source: timesofisrael.com. Photo: Sotheby’s.

Ashmolean Museum returns artwork it was bequested to original owners after discovering it was linked to Nazi looters.

It was one of the greatest bequests the Ashmolean Museum had ever received: an exceptional collection of Renaissance and Baroque treasures from the estate of Michael Wellby, a prominent British collector.

Mr Wellby, who hailed from a family of silver dealers, left almost 500 rare objects to the Oxford institution following his death in 2012.

One of the most spectacular was a salt cellar dating from 1560, which would have graced the table of European kings. But when the Ashmolean began researching its provenance, they uncovered a troubling history. The museum had unwittingly acquired a work looted by the Nazis.

Although there is no evidence to suggest Mr Wellby, who ran a silver shop in Mayfair, acquired the piece in anything other than good faith, it had been parted from its Jewish owners in 1937.

The Ashmolean has now returned the object to the family to whom it once belonged, and it will be auctioned in the Sotheby’s Treasures sale this week with an estimate of £500,000.

The story shines a light on the restitution market and follows last month’s £1.8 million sale of Two Riders on a Beach by Max Liebermann, the first painting recovered from the collection of Cornelius Gurlitt.

When police raided the modest Munich apartment of the elderly Gurlitt, they made one of the art world’s most astonishing discoveries. Hidden behind shelves of tinned food and out-of-date juice cartons were 1,400 artworks worth an estimated £860 million, including paintings by Picasso, Matisse and Chagall. The reason for the subterfuge? Many of the works had been looted by the Nazis and amassed by Gurlitt’s father, an art dealer approved by the Third Reich.