December 3rd, 2021 | Browse other: News. | Tagged with: Amsterdam’s Rijksmuseum has announced a “first and last” exhibition of all the paintings by Johannes Vermeer, Museum rivalry ‘could make Dutch Vermeer show last of its kind’ | 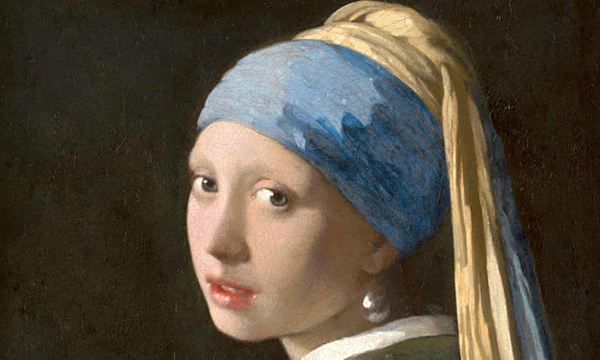 Girl with a Pearl Earring will be loaned to the Rijksmuseum from the Mauritshuis in The Hague. Photograph: Margareta Svensson/c/o Rijksmuseum.

Rijksmuseum aims to bring together all the works by Girl with a Pearl Earring painter that are fit to travel.

Amsterdam’s Rijksmuseum has announced a “first and last” exhibition of all the paintings by Johannes Vermeer that are fit to travel, as its director claimed growing museum rivalry makes such international cooperation unlikely in the future.

Vermeer, whose most famous work is Girl with a Pearl Earring, dating from around 1665, is thought to have painted 35 masterpieces, of which 23 were shown together 26 years ago at the Mauritshuis in The Hague.

Taco Dibbits, the Rijksmuseum director, said his institution would surpass that number but he did not expect such a collection to ever be possible again owing to the age of the works and the intense competition among galleries to draw in visitors.

“What I am seeing, if you look since the 1996 exhibition, it is more and more difficult to get the loans because Vermeer is such an iconic painter,” he said. “For museums to part with Vermeer’s work is more and more difficult. Because it is the first [for the Rijksmuseum], it has created a kind of feeling that we have to do it now as it gives an opportunity to compare and study the works together.

“The pressure on museums to make exhibitions is larger. There are more and more museums in the world and works from the 17th century are fragile. There is more pressure on the works.” 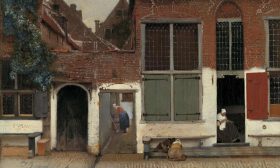 The Milkmaid, one of the Rijksmuseum’s Vermeers. Photograph: c/o Rijksmuseum.

Vermeer, who lived and worked in Delft in the west of the Netherlands, is widely regarded to stand with Rembrandt, Van Gogh and Picasso as one of the finest artists in history, but relatively little is known about him or the subjects of his paintings. He was barely known as an artist when he died at 43 in 1675.

The latest technology in the study of art has recently revealed the strenuous preparation and effort he made with his paintings, and the expensive pigments that were used, explaining his relatively small oeuvre of works. 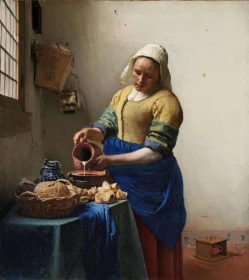 The Milkmaid, one of the Rijksmuseum’s Vermeers. Photograph: c/o Rijksmuseum.

The newly restored Girl Reading a Letter at the Open Window, from the Old Masters Picture Gallery in Dresden, will be seen for the first time in the Netherlands. Dibbits said negotiations were ongoing with museums to try to get the maximum number of works.

“I think that will be impossible to have them all, but we are getting lots, more than I ever dreamed to have,” he said. “Some works are very fragile.”

Dibbits said gathering the paintings together would offer an opportunity to “an entirely new generation of researchers and public who have never been able to study Vermeer in such a way”.

He said: “It is incredibly hard for researchers when you move between museums to look at paintings, your brain has done a lot of tricks, it is very difficult to actually compare.”

The Rijksmuseum has four masterpieces by Vermeer, including The Milkmaid and The Little Street.