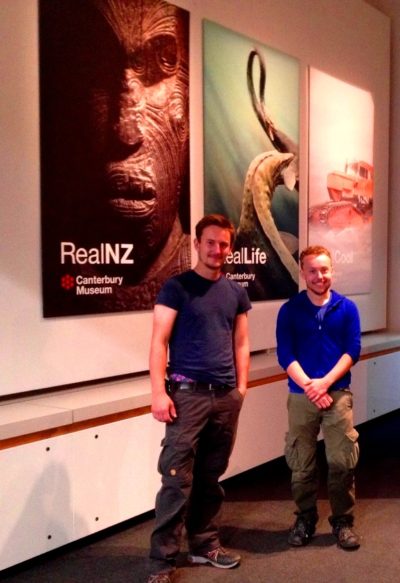 German tourist Lewin Knievel was the 650,000th visitor through the Museum doors in 2015/16. Source: Canterbury Museum.

Canterbury Museum has passed its annual target of 650,000 visitors with two months to go before the end of the 2016 financial year.

German tourist Lewin Knievel was the 650,000th visitor through the door of the Museum late yesterday afternoon. He has been in New Zealand since March travelling with Robin Roeder (right).

That puts the Museum firmly on track to achieve its highest-ever visitor numbers for the Museum and its special exhibition Quake City, surpassing the current record of 665,866 set in the 2015 financial year.

Museum Director Anthony Wright says the Museum expects to achieve more than 700,000 visitors by the end of the year on 30 June.

“Our visitor numbers just keep growing as more local people return to the central city and we have more tourists visiting and staying longer. “We had an excellent summer, particularly January when we welcomed more than 100,000 visitors in just one month.

“Good visitor numbers have continued into the Autumn and it’s pleasing to see the strong local interest in our current exhibition Alternative Radio. The programme of live music, gigs and broadcasts is attracting good audiences, including Friday night’s sold-out performance which was awesome.”