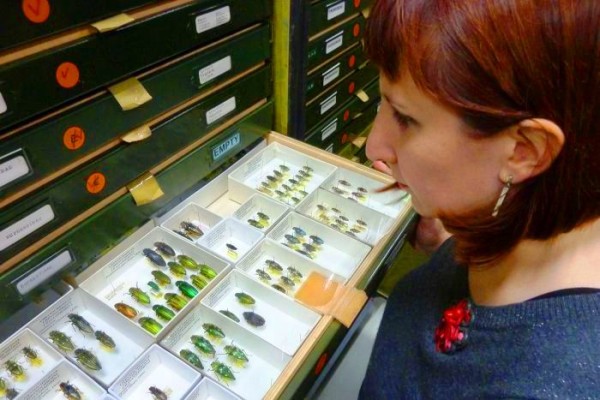 A day in the life of a museum taxonomist – Amber Beavis, Radio National, 17 August 2015

Taxonomy might not sound glamorous, but it plays a vital scientific role: collecting and cataloguing the natural world for study. Dr Amber Beavis takes Off Track on a guided tour of the Western Australian Museum and explains what life is like for your friendly neighbourhood taxonomist.

Dr Amber Beavis is a research scientist and taxonomist at the Western Australian Museum, where she specialises in the arachnids of Australia and the Pacific Islands. In her day-to-day work she identifies specimens as they come in from the field and re-examines older specimens from the collection.

Much of the work is highly detailed, taking DNA samples, making measurements and even counting the number of hairs on a spider’s abdomen. Such detail is necessary in order to declare a new species. Beavis let Off Track tag along for a day in the life of a taxonomist, and we got a behind-the-scenes tour of the museum.

Every day on the way to the lab I pass one of the WAM’s iconic objects: our blue whale skeleton. I’m standing next to its skull here, but the entire specimen is 24 metres long. I’ve worked here for three years and seeing this skeleton never gets old. The blue whale will be back on public display when WA’s New Museum opens in 2020.