Dr Patrick Greene, OBE, to work with Board on transition process. 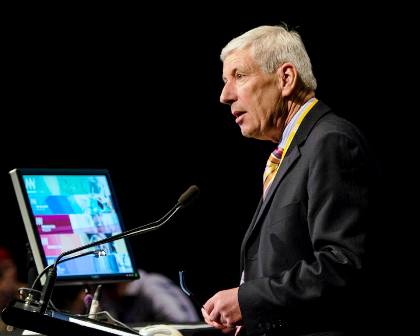 After nearly 15 years at the helm of Australia’s largest public museums organisation, the Chief Executive Officer of Museum Victoria, Dr Patrick Greene OBE, will retire from the role in February 2017.

The President of the Museums Board of Victoria, Professor Margaret Gardner AO, said Dr Greene had achieved outstanding success to position Museum Victoria as a leading international cultural and research organisation.

‘’On behalf of current and past Board members we acknowledge Dr Greene’s contribution and look forward to working with him over the next 12 months as we implement an international executive recruitment process for his successor.’’

Dr Greene, an archaeologist who moved to Melbourne from the UK in 2002 to take up his appointment at Museum Victoria, said it was an enormous privilege to lead the organisation at a time when the ways in which people engage with museums are constantly evolving.

‘’I’m extremely proud of our achievements to date and there are still a lot of exciting opportunities for Museum Victoria over the next 12 months including our blockbuster Jurassic World: The Exhibition, the new Pauline Gandel Children’s Gallery which is due to open in December this year and our work to conserve and promote Melbourne’s iconic Royal Exhibition Building. A new Melbourne Planetarium show at Scienceworks will be another highlight for 2016.

‘’I now want to ensure that the organisation and our dedicated team of staff and volunteers are well positioned as a museum of the 21st century,’’ Dr Greene said.

‘’Our reach is vast – we not only care for a diverse collection of 17 million items but we also mount our own pioneering permanent and temporary exhibitions, inform and inspire nearly 70% of Victoria’s schoolchildren each year, manage extensive outreach in metropolitan and regional Victoria, nurture creative partnerships and installations and carry out ground breaking research in the natural sciences and humanities. Our websites also attract more than five million users each year.’’

Minister for Creative Industries Martin Foley paid tribute to Dr Greene and his outstanding contribution to Museum Victoria and the State.

“Under Patrick’s leadership, Museum Victoria has grown into the leading museum organisation in the country and has been internationally recognised for its innovative exhibitions and programs, as well as its extensive research.

“During his tenure more than 20 million visitors have been welcomed to Melbourne Museum, Scienceworks, Immigration Museum and the Royal Exhibition Building, encountering a world of ideas and inspiration.

“This extraordinary track record, as well as the exciting projects in the pipeline, will see Patrick’s legacy loom large for many years to come. “

Highlights during Dr Greene’s tenure include:

Dr Greene was recently re-appointed Chair of the National Cultural Heritage Committee by the Federal Minister for the Arts and Communications, Senator Mitch Fifield.