You are here: Home » Articles filed under: 'News' » Article: 'Museums and Brexit' 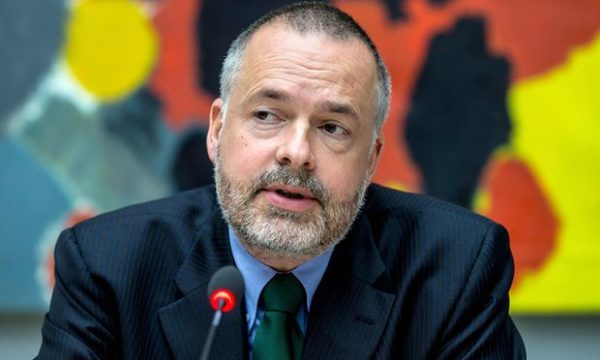 Hartwig Fischer: ’In uncertain times the British Museum becomes ever more important in helping us understand how we got here.’ Photo: Alamy.

The new director of the British Museum, Hartwig Fischer, who took over after a record-breaking year at the museum just 12 weeks before the Brexit vote, has predicted that its role will be more essential than ever in the wake of the referendum.

“I think in uncertain times the British Museum becomes ever more important in helping us understand how we got here and how we proceed in the future, within this country and in the context of Europe and the world,” Fischer, who is German, said.

The museum in Bloomsbury, central London, had just under 6.9 million visitors, and a further 7.7 million people saw objects from the collection at touring exhibitions and loans outside London. The figures make it the leading visitor attraction in the UK for the ninth year, and the second most visited museum in the world.

The museum’s trustees are still trying to tease out the implications of Brexit in terms of EU-funded research projects, corporate and private funding and international loans, but Fischer pledged that both free admission and its partnerships with other museums in the UK and across the world would be maintained.

Positions Vacant » View All
» Head of Engagement – MAGNT
» Exhibitions Manager – MAGNT
Latest News » View All
BM hire curator to research colln history
incl contested objects eg Parthenon Marbles Read more.
NMA opens Piinpi: Contemporary Indigenous
Fashion - Bendigo AG conceived & curated Read more.
SAM, NIWA & Univs date last pole switch
via 42,000 yo kauri in ancient Ngāwhā swamp Read more.
ArtsHub report on First Nations arts jobs
Gina Fairley observes strong increase Read more.
Albanese’s quote on the frontier wars
intended for AWM speech – Paul Davey's view Read more.
Top +
Council of Australasian Museum Directors, c/o Ms Daryl Karp, Museum of Australian Democracy at Old Parliament House PO Box 3934 Manuka, Australian Capital Territory 2603 Australia, © CAMD 2021
Copyright: All information and resources provided on this website remain the copyright of the Council of Australasian Museum Directors. Permission is granted for viewing and downloading for personal and not for profit purposes. Those wishing to reproduce any materials for commercial, educational or other uses are requested to contact us.
Disclaimer: The content of this website is provided for information purposes only and is not intended as a substitute for professional advice. No claim is made as to the accuracy or authenticity of the content of the website. The Council of Australasian Museum Directors does not accept any liability to any person for the information or advice (or the use of such information or advice) which is provided on this website. The information on our website is provided on the basis that all persons accessing the site undertake responsibility for assessing the relevance and accuracy of its content. No responsibility is taken for any information or services which may appear on any linked web sites. Hostgator.
.