You are here: Home » Articles filed under: 'News' » Article: 'Museums and Neutrality'

Center for the Future of Museums blog, The Limits of Neutrality: A Message From The Natural History Museum 23 April 2015

Today’s guest post, from the team at The Natural History Museum (including director Beka Economopoulos), illustrates one of the trends I discuss in TrendsWatch 2015, and touches upon another. In the chapter on “Ethical Everything,” on the rise of the moral marketplace, I pointed to Beka’s new museum as an example of the increased scrutiny being levelled at our field. Her organization raises uncomfortable questions about the ability of policies and procedures to firewall museum practice against the power, money and influence wielded by donors and board members. And the particular issue The Natural History Museum tackles—the responsibility museums bear for educating the public about the science that should inform our policies on climate change—has direct implications for the changing landscape of museum risk as well (another TW15 theme). You can continue this conversation with Beka and her colleagues in the comment section of the post, or by finding her at the annual meeting next week, where The Natural History Museum will be exhibiting in Booth #1741 of MuseumExpo. 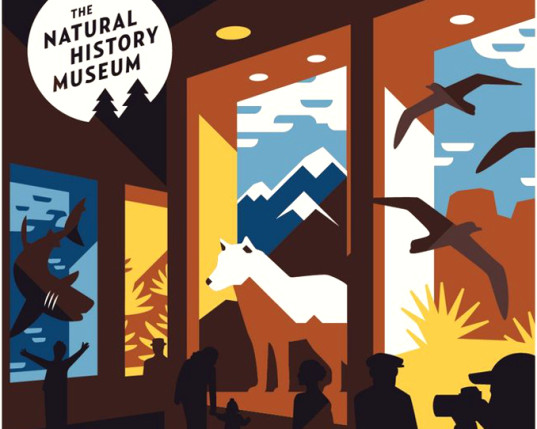 Images by Not An Alternative & USDAgov via Wikimedia Commons.The Natural History Museum made headlines a few weeks ago when we released a letter from dozens of top scientists, including several Nobel laureates and senior government officials, calling on science museums to cut all ties to the fossil fuel industry. The news went viral, kicking off a sector-wide conversation about ethics, funding, greenwashing, and fossil fuel divestment.

Within days, more than one hundred members of the scientific community reached out to add their support. Together with this growing list of signatories, we are asking museums of science and natural history to drop climate science deniers from their boards, cancel sponsorships from the fossil fuel industry, and divest financial portfolios from fossil fuels.

The Natural History Museum is a new museum that makes a point to highlight the socio-political forces affecting the climate. As a new member of the American Alliance of Museums, we take very seriously the Museum Code of Ethics, which states “It is incumbent on museums to be resources for humankind and in all their activities to foster an informed appreciation of the rich and diverse world we have inherited. It is also incumbent upon them to preserve that inheritance for posterity.”

We decided to initiate this letter upon learning that David H. Koch is a board member, major donor, and exhibit sponsor of the Smithsonian National Museum of Natural History and the American Museum of Natural History (AMNH). David Koch’s oil and manufacturing conglomerate Koch Industries is one of the greatest contributors to greenhouse gas emissions in the United States. Mr. Koch also funds a large network of climate change-denying organizations, investing more than $79 million since 1997 in groups that deny climate change science. David Koch’s actions, and those of his company, pose a significant threat to the continued preservation of the rich and diverse world we have inherited.

We believe that when David Koch sponsors the Smithsonian and the AMNH, these museums are also sponsoring David Koch. Museums provide their donors with cultural capital and social license, lending an air of unwarranted scientific legitimacy to benefactors who simultaneously bankroll anti-science disinformation campaigns and efforts to block action on climate change.

Many of our colleagues in the museum sector have noted that institutional policy protects  sponsors from influencing either administration or programming. We are told that funding is only accepted on the condition that there are no strings attached. Strings, however, need not be visible to make an impact, and self-censorship—however invisible or unquantifiable—is a major factor in every institutional decision. Nobel laureate Eri0.

Chivian recently put it this way: “It is just human nature not to bite the hand that feeds you.” Sponsorships do have an effect at every level, and when a sponsor is known for his anti-science practices, that sponsor circumscribes the very horizon of the possible, not through coercion, but through the invisible threat of withdrawal.

Imagine a major natural history museum that organizes an exhibition about the full range of causes and impacts of climate change, obstacles to action, and solutions/responses—one that directly and forcefully critiques the anti-science practices of its largest sponsor, be it a corporation like BP or a private benefactor like David Koch. Would this exhibition offer a scientifically accurate educational experience about anthropogenic climate change? Yes. Would it risk jeopardizing the museum’s relationship with its sponsor? We believe that it would. Is the risk worth taking? It is imperative.

In a time of profound environmental disruption, it is not enough for museums to accept the scientific consensus on human-caused climate change. We need museums of science and natural history to take a stand, to call out the biggest polluters and obstructionists to action on climate change. We need museums to equip visitors with the stories and tools they need to shape the world in the public interest. Faced with pervasive attempts by the fossil fuel lobby to muzzle scientific research and spread disinformation, countless scientists have stood together to declare that the time for neutrality has long since passed.

Museums, like scientists, have historically maintained a position characterized by museologist Robert Janes as authoritative neutrality. This widely held position affirms that “we must protect our neutrality, lest we fall prey to bias, trendiness or special interest groups.” But as Janes points out, as museums increasingly depend on private-sector sponsorship, their claims to neutrality take on an ideological bent. After all, what are corporations if not special interest groups?

Neutrality is a political category, one that hides from view the alternatives against which it is defined. And the claim to authoritative neutrality is dangerous precisely because it prevents institutions from seriously re-evaluating their roles in a time of climate crisis. At a time when powerful lobbies representing the interests of the fossil fuel industry seek not only to influence public policy but also buy the next election, we can only see neutrality as another word for resignation. And as the overwhelming majority of climate scientists predict, without taking action, there will be no future, let alone a future for museums.

Museums of science and natural history are indispensable public spaces for the transmission of knowledge about the world we live in. They are among the most trusted sources of information. But when these institutions have significant ties to the world’s biggest polluters, or ignore the massive impact of the fossil fuel industry on the continuity of the earth’s many species, we are forced to question whose interests they serve. When museums cozy up to climate deniers and fossil fuel companies, they risk undermining the faith and trust they’ve earned through years of dedicated service.

As sites that both represent and supply basic societal infrastructure, museums of science and natural history are not just necessary; they are worth fighting for. We are urging museums of science and natural history to rise to the challenges of the present. This means presenting exhibitions on climate change that address the role of the fossil fuel lobby and its climate-denial machine in the shaping of nature—exhibitions that take on anthropogenic climate change without excluding the vast asymmetries in the burden of responsibility and the burden of impact.

If there is to be a future for museums, we need to do away with the false promise of authoritative neutrality. We need our museums to function as both educators and yes, as advocates for a sustainable and equitable future. Only then can we equip visitors with the stories and tools they need to truly understand the rapidly changing world, and to shape it for the common good for generations to come.

Launched in September, 2014, The Natural History Museum offers exhibitions, expeditions, educational workshops and public programming. Unlike traditional natural history museums it makes a point to include and highlight the socio-political forces that shape nature. The museum’s programs appear within existing institutions, in its 15-passenger mobile museum bus, and online at http://TheNaturalHistoryMuseum.org.

Next week, The Natural History Museum will be at the American Alliance of Museums annual convention in Atlanta, where it will mount an exhibition on fossil fuel industry greenwashing in science museums. Find us at Booth #1741 in the Museum Expo on the convention floor, “traveling exhibitions” section.