You are here: Home » Articles filed under: 'News' » Article: 'Museums can be very ‘exclusive’ places'

Museums can be very ‘exclusive’ places 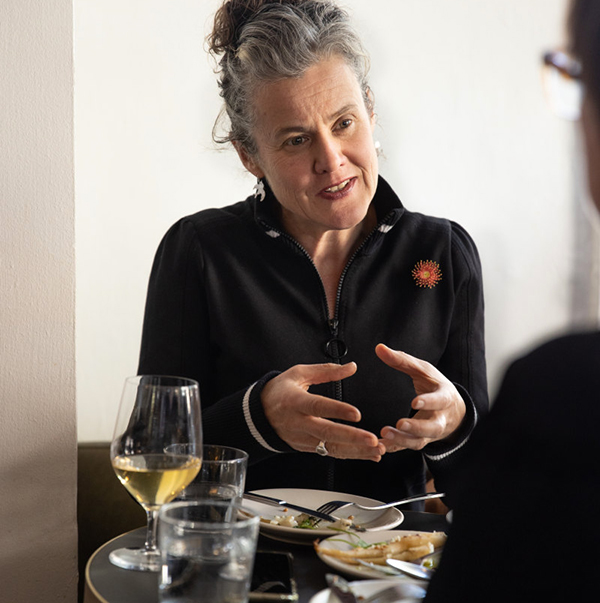 Even though it was more than 35 years ago, I am deeply envious of Rose Hiscock’s childhood. When she was 13, her family moved to Buninyong in regional Victoria, when her dad became the director of Ballarat’s Sovereign Hill, the “living museum” that recreates the city’s gold rush years. Hiscock’s whole family was heavily involved with the outdoor museum, and she loved it, regularly role-playing in colonial costumes.

“We did it most weekends – we’d dress up and go and hang out and pan for gold. I loved it,” she says. “I’m sure for some 14-year-old kids it would be their worst nightmare, but for me it was great; I was a very theatrical kid and I had every outfit, from street urchin to a crinoline, depending on what day it was.”

Her dad would often ride a horse to work, and also spent his workdays in various period costumes. It was a passion, Hiscock says, that got under your skin; it’s where her interest in cultural engagement began.

After a long career leading some of the country’s top cultural institutions, Hiscock is now the director of Melbourne’s new Science Gallery, which opens its doors in a brand-new building in coming weeks, after being delayed by you-know-what. Twice.

We meet ahead of the gallery’s first postponed opening at Napier Quarter in Fitzroy, one of Hiscock’s favourite locals. “It’s so great here,” she says. “It’s tiny, which I love, and the menu is seasonal and carefully put together.”

There are lots of small sharing plates, and owner Daniel chooses a selection for us: the chicken and duck liver terrine, salsify with horseradish and pine nuts, cuttlefish with black garlic and fennel pollen, and roasted Jerusalem artichokes. We order a glass of wine each as our dishes arrive regularly over the next two hours.

I grill Hiscock about Sovereign Hill and my dream childhood, which kicked off her lifelong interest in how to use objects to tell stories, “really to … create worlds”. After hundreds of weekends in period costume, and signing up for “every school play possible”, she moved to the city to study, of all things, economics. But she always had her sights set on the creative sector.

“It was in the 1980s, with high-interest rates and a sense of really needing a job. I felt that no matter where I wanted to be, it would be a useful degree,” she says. She concedes a lot of it was “like another language” (she studied arts subjects as well) but it ended up being a practical decision.

“By the time I was running institutions, it was very handy.” It also helps, she says, for the boards she sits on – among them dance company Chunky Move, and Back to Back Theatre Company. 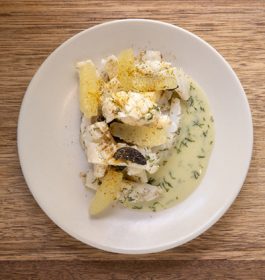 And she fell in with the creative kids anyway. “I came to Melbourne in the late ’80s when everyone was in Country Road and big hair and I turned up in my mohair, my corduroy and smoking my pipe! It was when Barrie Kosky was at Melbourne Uni; I was in all of his productions,” she says. “So I found my place through arts and culture.”

After travelling – and using her degree in Britain, tracking missing payments for a bank (“pre-internet and quite fascinating”) – Hiscock started working for Museums Victoria, first as marketing manager at Scienceworks, before moving to a role at the Melbourne Museum, eventually overseeing commercial operations. After 18 years, she moved to Sydney to work as executive director of arts development for the Australia Council for three years (“International stuff, like Venice Biennale”), before becoming director at Sydney’s Museum of Applied Arts and Sciences, which includes the Powerhouse, Sydney Observatory and the Powerhouse Discovery Centre.

In 2019 Hiscock became inaugural director of Science Gallery Melbourne, which for the past three years has run exhibitions as pop-ups in various spaces. (She is also the university’s director of museums and collections, overseeing Ian Potter, Buxton Contemporary, Grainger Museum and the Old Quad gallery, as well as the university’s collections.) She’s one of the few women leading major Australian cultural institutions but says she’s just been “lucky”. “The museum world is very rewarding,” she says. “It’s a nice world to work in.”

Helping launch an institution from scratch has been a challenge, but she and her team are excited that Science Gallery Melbourne is finally a tangible entity. 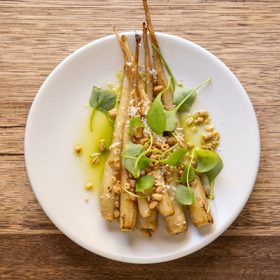 Part of a global university-linked network, the gallery’s mission is to foster collaborations between the creative and STEM (science, technology, engineering and maths) industries, and to engage younger audiences in science.

Traditionally in the cultural sector, arts and sciences have been separate, but Science Gallery blurs those borders. The curatorial process is also different; rather than a top-down process, exhibitions and ideas are drawn from public call-outs and think tanks. Young people are also an integral part of the gallery, with students from the university often acting as facilitators.

“It really works,” Hiscock says of the model. “I had a letter from someone when we did a pop-up exhibition. It started off by saying they had to wait 45 minutes – I thought it would be a letter complaining, but this one said she wanted to thank me because in that 45 minutes, the young guide, one of the uni students, convinced her daughter to study science.”

The gallery has had several exhibitions since 2017 but the latest, MENTAL: Head Inside, is the first in the purpose-built building on the former site of the Royal Women’s Hospital in Grattan Street, part of the university’s new Innovation precinct. And like the concept itself, the building is experimental; some of the exterior bricks around the entrance are “digital bricks”, made from glass with high-resolution screens embedded within, the largest combined pixel display in the southern hemisphere.

MENTAL: Head Inside explores different perspectives on mental health. Curated by a team of young people alongside academics and experts, the exhibition features immersive works, including a human-sized hamster wheel examining the effect of playful spaces and exercise on mood, an animated old-school telephone work, Hello Machine, Hello Human, which offers conversations from both robots and real people, but viewers can’t be sure which they are hearing, and Selfcare_4EVA, in which two artists, Mary Angley and Caithlin O’Loghlen, will spend seven days in a fake bedroom in the gallery’s windows, in attempt to become “the most famous wellness influencers on the internet”.

Wemba Wemba and Gundithmara artist Rosie Kalina has created Respite Space, a place for visitors to rest and reflect on the impact racism has on the mental health of Indigenous people. “Museums can be very ‘exclusive’ spaces – people think ‘that’s not for me’ – but in our world, we invite and encourage multiple voices. We have a lot of work with First Nations people,” Hiscock says.

“The big change for the cultural sector now is decolonisation. We’re doing it, we’ve been working with Brook Andrew to start thinking through our practice and approach to reimagining who we are.” 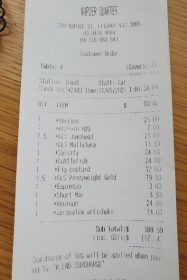 Receipt for lunch at Napier Quarter.

By the time we’ve eaten our way through most of Napier Quarter’s small menu (each dish tastier than the previous), we’ve talked collections, from the university’s that Hiscock oversees, which includes rare books, medical history, geology and more, to her own (“I’m not great at throwing things out – I’ve still got all my Matchbox and Tonka cars, a fair bit of taxidermy …“), cooking (“I’m more of a pickler and a preserver, although I come from a family of bakers, on both sides”), the virtues of vinyl over Mp3s (“My partner and I throw a Christmas party every year and we have a battle of vinyl versus Spotify”) to vintage cars. Hiscock has always had classic cars, and her current is a 1970 MG fastback. “Yes, I am at the mechanic a lot, but she’s beautiful.”

Growing up, her dad had a steady collection of old cars, from old Holdens, a Bentley and even a Gogomobil. “He still has a 1930s Rolls Royce, which is fantastic,” she says.

But while we both wax nostalgic about analogue technology, future tech and young people are at the heart of Hiscock’s new role and her advocacy for scientific engagement; something she finds energising.

“It’s very positive. As curators and practitioners, you might curate in a way that’s very different, because of age; I might view things differently, but the young people are inherently optimistic,” she says. “They have that sense of possibility, that there’s a world ahead of you, and that makes me optimistic.”