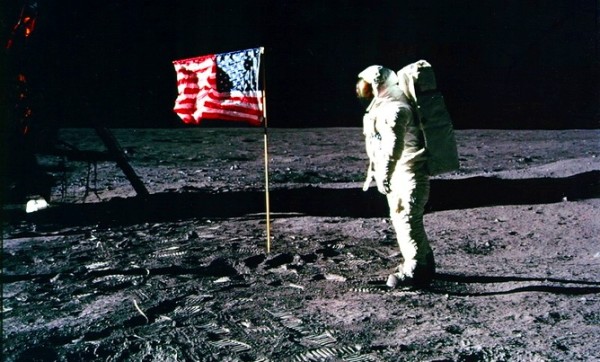 Neil Armstrong’s suit has attracted over $500,000 from crowdfunding. NASA/HO.

Jenny Kidd, Museums are becoming more playful … in how they ask us for money, The Conversation, 30 July 2015

On the 46th anniversary of Neil Armstrong’s giant leap for mankind, the Smithsonian’s National Air and Space Museum launched their phenomenally successful Reboot The Suit crowdfunding campaign, the Smithsonian’s first attempt at garnering micro-payments through the site.

They have now reached their goal of $500,000 in supporting pledges, meaning that the conservation, digitization and display of the original spacesuit worn by Armstrong for the moon landing in 1969 can now begin. I found myself captivated by the Twitter frenzy generated by the campaign and (not for the first time) lured into making a pledge by the promise of stickers and kudos.

The Smithsonian is not the first museum to turn to crowdfunding as a mechanism to secure financial investment and to foster relationships that are the other truly valuable legacy of such campaigns. The UK Museums Association has tipped crowdfunding as the big growth area for this year, especially for smaller organisations that might otherwise struggle to get new initiatives off the ground.

There are now plenty of success stories. Llandudno Museum raised more than its goal of £3,000 in 2014 in order to bring home Blodwen, a skeleton from the Neolithic period. The People’s History Museum recently successfully crowdfunded Join The Radicals, their #GetMary campaign to sponsor a radical hero – in this case Mary Wollstonecraft – and put her name on the wall of the museum. In these instances, and most of those on the Art Fund’s Art Happens crowdfunding website, the total goal is far more modest than that of Reboot The Suit. There have been less positive experiences also; earlier this year the campaign to raise funds to open an Ian Curtis Museum in Macclesfield only raised 1% of its overall goal of £150,000.

So crowdfunding is an unpredictable endeavour. Research shows that most projects either exceed their goal amounts by narrow margins, or else fail catastrophically. There are of course some stories of significant overfunding too, and Reboot The Suit looks on course to enter that category.