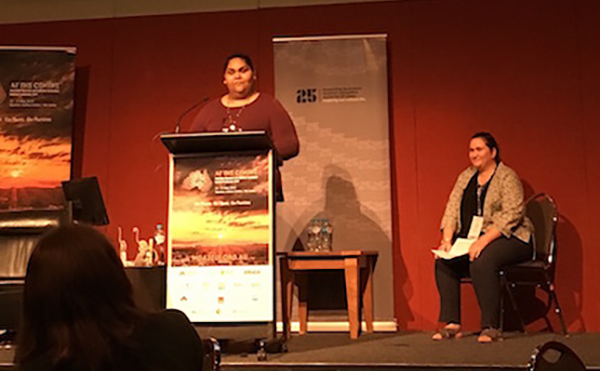 Impossible to go to the national museums conference, held in Alice Springs last week, without thinking about the agenda set by the Northern Territory Government to create a national Aboriginal art gallery here.

Our experience of that proposal to date was the elephant in the room, all the more so given the major themes of the conference, which were around telling stories in museums and galleries, and who gets to tell them, in particular, the stories of First Nations.

First Nations people being fully in charge is, it would seem, a rarity. An inspiring exception is The 2020 Project, giving the “right of reply” to next year’s 250th anniversary of James Cook’s first voyage to Australia. The Australian Museum in Sydney has placed the direction of the project entirely in the hands of two young First Nations curators, Laura McBride, and Mariko Smith.

The museum has put away its substantial Cook collection; it will not be shown. Its only response to the anniversary will be what these curators, working with their communities, come up with. And it clearly won’t be a celebration of Cook.

This direction has been established by a survey that set out to capture meaningful information from a large representative sample of Aboriginal and Torres Strait Islander people. The survey got over 800 responses from members of 175 different nations or language groups or clans, with a significant concentration in NSW.

A majority of associations with the museum itself were either neutral (47%) or positive (21%), but a significant proportion was negative (32%), with the leading concern of this group being that the museum was “white”, representing “their” history, and under non-indigenous control.

The answers on the project itself were unambiguous.

Associations with the name of Cook were overwhelmingly negative (87%): “invasion, invader” topped the list.

Truth-telling was identified as a key objective of the project (40%), with “colonisation and its effects” as the leading topic to be addressed (59%).

What should not happen is “praise and glorification” and representing Cook as a hero (212 respondents); this was followed by concerns about “false history”, whitewashing and “colonial fiction” (163); and rejection of the notion that Cook “discovered” Australia (133).

How this clear direction will manifest in the museum’s program is the curators’ next big step, to have ready by August next year.

In the meantime, McBride and Smith hope other institutions will take up the survey’s findings (the report will soon be available on the museum’s website), relevant not only to the 1770 anniversary but also as a methodology for consultation.

Another pair of First Nations young women, emerging as curators, took the lead in the keynote address from the South Australian Museum. They were Jade Turner, who acknowledged her ancestors in Mparntwe, and Jacinta Koolmatrie, an Adnyamathanha and Ngarrindjeri woman. Turner is completing a Bachelor’s degree in archeology; Koolmatrie already has under her belt Bachelor’s and Master’s degrees in the discipline.

They predicted that their presentation would make the audience feel “uncomfortable”, by confronting the bias towards white privilege that is ingrained in museum culture, and Australian culture more broadly. They began by initially excluding from the stage John Carty, Head of Humanities at the museum, to whom the program had given lead billing.

They told a story about conducting a tour of the museum for some educators in the company of Carty, and observing the very different reactions from people on the tour when he spoke compared to when they spoke: for Carty they got out their notebooks, started taking pictures, here was “the voice of authority” and it belonged to the white man.

Turner spoke about the conflicting feelings  for First Nations people of working in a space that “for a really long time has been a place of violence, sadness, stolen goods – because this is what they are, and I think sometimes people don’t want to admit this.”

The pain extends to the way cultural collections are dissected, labelled, objectified by white anthropologists.

“We are living people, we are a living culture, and this is something we still feel, even inter-generationally,” she said.

She spoke about experiencing daily the censure of others who react to her critiques as complaining and negative. She challenged the audience to examine what their own reactions had been to First Nations presenters in the course of the conference.

At the other end of the spectrum, she described being completely ignored when she had raised issues or given an opinion; alternatively it had been suggested to her that her view could be rephrased.

“If I have something to say, I can say it myself,” she said. “I don’t need it to be rephrased … the chances are that the first thing I said was the truest thing I said.”

She had a solution to propose, just one suggestion, not enough but a start, and that was for institutions to build and facilitate “internal communities.”

She mentioned the example of the Australian Museum, having a group of strong Indigenous people inside the organisation, who had each other’s backs: that seemed to be “working extremely well for them.”

She hadn’t minced her words and neither would Koolmatrie. The pair are very close.

Koolmatrie spoke about how difficult it is to trust white people working in heritage spaces, the experts: “Their knowledge of our culture has been weaponised against us.”