Museums in middle of ‘war on woke’ –

June 26th, 2021 | Browse other: News. | Tagged with: Monuments museums and galleries are caught uneasily between activists and an interventionist government, The ‘war on woke’: who should shape Britain’s history? | 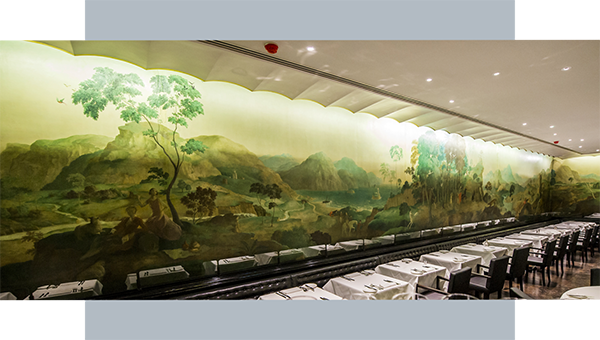 Alex Barker & Peter Foster, The ‘war on woke’: who should shape Britain’s history?,

Monuments, museums and galleries are caught uneasily between activists and an interventionist government 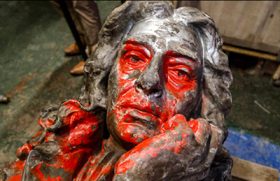 The “refreshment room” of Tate Britain once had all the relaxed charm of a dungeon. Diners were squeezed between imposing iron pillars. Water pipes crisscrossed the walls. Arched windows completed the prison aesthetic. It was, a journalist at the time wrote, a “forbidding cellarage”.

Then, in 1926, the gallery hired a 20-year-old artist called Rex Whistler, paying him £5 a week to transform the room with a mural. “The Expedition in Pursuit of Rare Meats” follows seven travellers from the fantastical town of Epicurania on a quixotic journey, hunting unicorns and exotic prey across lush valleys, waterfalls, and proud neoclassical monuments. Not only did the whimsical fresco save the restaurant, it became its main attraction — the Tate billed it as “the most amusing room in Europe”. It was renamed after Rex Whistler, the son of a village builder, in 1953. Large sums were spent on renovating it in 2012. And today, once again, Whistler’s masterpiece will seal the restaurant’s fate, according to gallery insiders. Thanks to what he painted on those walls, it will almost certainly be shut, never to reopen. After layers of grime were removed during the revamp in 2012, the problem was unmistakable.

Not only were racist, Orientalist caricatures visible, but depictions of a black boy, half-naked and enslaved, being dragged along by a jaunty princess. In one image, he is chained by the neck to a red chariot.

Restaurant staff and a visitor first raised concerns some seven years ago. Well-meaning committees were convened. Explanatory leaflets were adjusted. But the occasional complaint kept coming, along with social media fire. More desperate options were drawn up, including obscuring the offensive images “with furniture or hanging pictures”.

Once the Black Lives Matter movement took off, the Tate’s explanatory panel looked even more inadequate. “I just don’t think you can dine there thinking everything is fine,” says one Tate trustee, confirming it will be closed. What remains uncertain is where the restaurant will move to and what happens to the large room left behind. A consultation on this is being planned.

Part exquisite artwork, immovable monument and racist mural, there are no easy answers to the Whistler. But the sense of unease rippling through Britain’s museums and galleries is not just over the dilemmas posed by such relics of an imperial era, offensive paintings, plundered treasures or statues of fallen heroes. It is a broader one, touching on a 268-year-old precedent — set by the foundation of the British Museum — for how to manage national collections that were amassed through empire and held by trustees for the “public benefit”. An astonishing 100m objects are held in the UK’s 15 taxpayer-funded national museums. Who should decide what to do with the contested heritage within this trove? 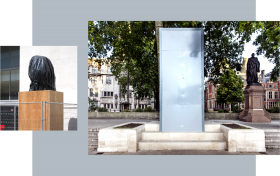 A bust of Nelson Mandela under wraps on London’s Southbank, June 2020, and a boarded-up statue of Mahatma Gandhi in London’s Parliament Square, June 2020. Both were covered up for fear of right-wing attacks in the wake of Black Lives Matter protests © Getty Images.

For intertwined with Britain’s reckoning with its colonial past — and the so-called “war on woke” waged by Boris Johnson’s government in response — is a more fundamental battle for control, playing out behind the scenes of independent institutions such as the Tate, the British Museum, the Royal Museums Greenwich and the Science Museum. Trustees are volunteers, typically drawn from the ranks of business, the arts and academia, serving on boards largely appointed by the government but given operational independence. It is supposed to be a tranquil business. But recently trustees have been denied second terms by Downing Street, thrown aside for critical comments on social media or for refusing what one described as “an oath of allegiance” to ministers.

Culture secretary Oliver Dowden has cast it as simple guidance to “retain and explain” contested statues and objects, “however challenging this may be”. More controversially, the policy was made a test for new board appointments. A phrase arguably vague enough to be meaningless — there are 8m objects retained in the British Museum’s collection and just 1 percent is displayed — is now seen by some trustees as a menacing tool to exercise state power over the arts.

Sir Charles Dunstone, a self-made billionaire who chaired the Royal Museums Greenwich, resigned in protest at ministers refusing to reappoint a trustee. Other boards have faced similar dilemmas. More than a dozen trustees in total have told the Financial Times of their deep disquiet. But Johnson’s team are pressing on methodically, with the swagger that comes with a thumping election majority, to bring to heel the so-called “arm’s length bodies” that oversee Britain’s great national collections and even charities such as the National Trust.

Whether led by “take-it-down” activists or conservative enemies of a “new Puritanism”, Britain’s culture war seems ever more shrill. Meanwhile, academics who have attempted to “explain” the past have found themselves pilloried in the rightwing press. “What is really coming under attack is the idea that experts can serve the public,” says Sarah Dry, a historian of science who quit the board of the Science Museum after being asked to explicitly endorse government policy. “It’s the language about experts as elites who are the enemy of the people, rather than people with specialist knowledge of a particular subject. The public suffers because the quality of museum work suffers, when the space for independent expertise gets squeezed.” 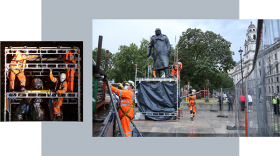 Workers cover up, and later uncover, a statue of Winston Churchill in Parliament Square in June 2020 © Getty Images.

Cultural boards have long been a home for patronage. From Margaret Thatcher to Tony Blair, governments have set the tone of policy for museums and galleries, filling their upper ranks with allies and their coffers with public funds. Nicholas Coleridge, the former media executive who chairs the board of the Victoria and Albert Museum, says he is “unashamedly grateful” for the £2bn pandemic rescue package for the arts and comfortable with ministers setting broad policy on contentious objects. “National museums have always had an obligation to retain their collections and take care of them, that’s a cornerstone of the job,” he says. “As for ‘explain’, who could reasonably object to that?”

But this government’s more interventionist approach stands out from past practice as being more overt, policy-driven and aggressive in its aims and it has alienated some who believe in the need to confront the past, but are against removing statues. “We are all the children of colonial history, either perpetrators or victims. It is shameful, that history, but it happened,” says Sir Antony Gormley, the acclaimed British sculptor and a former board member of the British Museum. “We are not going to solve it by hiding evidence of its inequities or its attitudes.” Gormley recently suggested that a statue of Cecil Rhodes that has long been at the centre of controversy at Oriel College, Oxford, should be turned to face the wall; the college’s decision to keep the colonialist in situ led some 150 Oxford dons to announce this week that they would refuse to teach there.

But Gormley bristles at the impression he has of a government sliding towards “a Maoist notion that art is expected to illustrate state policy”. “Art spent a century liberating itself from the duties of serving power, either political or financial,” he says. “If now the government — for whatever its reasons — is trying to somehow restrict or corral, this is a really serious sickness. It is none of their business.”

It was the second interview to join the board of trustees at the Royal Armouries that really surprised Catherine Fletcher. As a professor of Renaissance history at Manchester Metropolitan University who had worked as an adviser on the televised version of Hilary Mantel’s Wolf Hall, she was well prepared to establish her credentials as a serious academic with a record of popularising history.

After a first interview for the unpaid post in December 2020, which lightly touched on contested heritage, Fletcher received a note from a Department of Culture official. Would she mind having a “quick hangout” to follow up? It was then, in a call the following day, that her views were more directly interrogated. “It was quite explicit in the interview that the government was keen to ensure that new trustees supported their views on statues in particular,” she recalls. 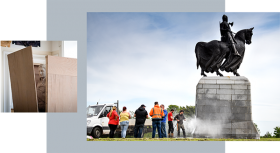 The boarded-up statue of Thomas Picton at Cardiff City Hall, July 2020; workers clean the Robert the Bruce statue in Bannockburn, Scotland, after it was defaced with graffiti, June 2020 © Getty Images.

Fletcher says she found the line of questioning troubling. She describes herself as an “ordinary” member of the Labour party who, after a prominent spell in student politics, is no longer particularly active. “I had expected to get questions about the ethics of dealing with the collection. What I didn’t expect was to effectively be asked ‘do your broader views on heritage align with government policy?’,” she says.

A closer examination of the government’s nine-page document calling for applications for the Royal Armouries’ board shows that Fletcher should not perhaps have been surprised. Listed among the required “specific skills and expertise” is “a commitment to preserving cultural heritage in place”. The rubric also warned applicants there would be “searches of previous public statements and social media” and these could be “shared with ministers”. One distinguished figure in the arts described the vetting as “frankly pretty shocking”.

Only under questioning did Fletcher recall a facetious tweet she had sent as debate raged over the statue of slave trader Edward Colston, which was tipped into Bristol Harbour last year. “If the defend-statues brigade are really that keen to see Colston, let them organise a glass-bottomed boat trip,” Fletcher wrote, a flippant post she suspects lay behind her second grilling.