You are here: Home » Articles filed under: 'News' » Article: 'Museums in the digital age'

Museums in the digital age

The following article was first published in Artshub, 2 May 2014

Paige Mulholland, ‘Museums in the digital age’, ArtsHub, 2 May 2014

London’s Natural History Museum has five million visitors through the door each year but twice that through smart social media.

Museums exist to change the way people think about the natural world and our place in it, says Professor Ian Owens of the Natural History Museum, London and Imperial College London.

But does that purpose still exist when the information once held by museums can can now be accessed globally with the click of a mouse?

In a visiting lecture at the South Australian Museum this week, Owens said the need for museums has not changed but the way they curate and display their work must. Museums needed to embrace the digital age and see their ‘visitors’ as online users as well as feet through the door.

During the popularisation of public museums in the late 17th century, they were amongst society’s most influential storytellers, said Owens.  ‘Museums were put together to tell the very biggest intellectual stories of their day. The things that were changing the way we thought about the future,’ he said.

Now that the future has arrived, however, Owens identified a whole new set of challenges and competition for the modern museum. New considerations like citizen science and research, societal and environmental challenges, and the threat to the authority and appeal of museums presented by digital technology, are making traditional museums irrelevant.

When climate change is wiping out species faster than museums can describe them, citizen scientists and researchers are stepping on the toes of museum staff, and museums’ entire collections can be viewed from the home computer, Owens says it is imperative that museums learn to adapt, and quickly.

‘We can’t just tell the same stories we’ve always been telling,’ he said.

But, according to Owens, the opportunity to tell new stories in new ways is one that should be embraced. Using social media, museums can now reach larger, more diverse audiences than ever before.

“At our museum we get about five or six million people through the door each year… on our social media sites we get well more than twice that,” he said.

This wider reach for the Natural History Museum, London has revolutionised both their storytelling and their research. By sharing specimens on the image sharing platform, Flickr, the museum’s researchers have been able to identify unknown species with the help of scientists and experts throughout the world. Members of the public have also translated thousands of illegible, handwritten tags and labels into digital format, saving the museum staff hundreds of hours of labour.

The museum is now looking into a digital, wiki-style curation programme, whereby the public can contribute information and observations to upcoming exhibits.

‘We’ll put objects out, no labels […] and we will use wiki sites to curate that collection, so when you go up to it, you can look at what other people have said about it,’ said Owens.

This huge changes in productivity and public engagement for museums are significant, Owens says, but more significant still is the new focus on advocacy and environmental research being adopted by museums around the world. According to Owens, museums are ‘almost morally bound now’ to use their expertise, collections and reach to improve society.

Many natural history museums now have well-developed programmes on sustainability, climate change, and species preservation, using their unique sample collections and expert practitioners to gather information that could not be found through any other means.

Art and cultural museums are tackling social issues such as inequality, poverty and unemployment, with the addition of museums such as the Tate Liverpool and the Merseyside Maritime Museum being credited with reversing unemployment trends in previously struggling cities.

Many museums are also forming partnerships with universities and tertiary institutions, in order to ensure that museums remain a key part of society’s scientific and cultural landscapes for years to come.

‘Now that we have access to so much information […] brick-and-mortar museums don’t seem as necessary’, she said, ‘but leaving aside the fact that we need museums to preserve tangible heritage because you can’t make media about something that doesn’t exist, I think that experiencing something up close, personal and in-the-flesh is entirely different from reading about it or looking at a picture.’

‘Looking after cultural heritage and ensuring it’s available for posterity is a great responsibility,’ she said.

And despite the talk about threats and challenges to museums as we know them, Owens agrees that museums will continue to ‘change the way people think about the natural world and our place in it’ for a long time yet.

‘The mission of […] museums is just as important as it was before. It’s pretty similar to what it was before, but it’s more about the future’ he said.

Professor Ian Owens’ address, For the learned and the curious: the role of natural history museums in the 21st century, formed part of the Sprigg Lecture Series, which takes place at the South Australian Museum between April and November. 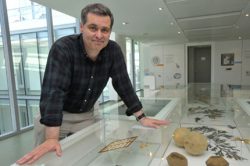 Professor Ian Owens. Source: South Australian Museum
Positions Vacant » View All
» Team Leader, First Peoples Art & Culture – TMAG
» Booking Services & Rostering Officer – SLM
Latest News » View All
Egyptians petition for BM to return
the Rosetta Stone Read more.
BM pledges ‘not to dismantle’ Parthenon
sculptures amid reports of talks with Greece Read more.
NHM to install life-size Titanosaur
cast The world’s largest dinosaur to fit (- just) Read more.
Gallerie d’Italia’s Art & Finance exhibition
- a long & mutually beneficial history Read more.
TMAG’s ‘Lost’ last Tasmanian tiger remains
found! ... cataloguing collections matters Read more.
Top +
Council of Australasian Museum Directors c/o Mr Brian Oldman, South Australian Museum PO Box 234 Adelaide, South Australia 5001 Australia, © CAMD 2022
Copyright: All information and resources provided on this website remain the copyright of the Council of Australasian Museum Directors. Permission is granted for viewing and downloading for personal and not for profit purposes. Those wishing to reproduce any materials for commercial, educational or other uses are requested to contact us.
Disclaimer: The content of this website is provided for information purposes only and is not intended as a substitute for professional advice. No claim is made as to the accuracy or authenticity of the content of the website. The Council of Australasian Museum Directors does not accept any liability to any person for the information or advice (or the use of such information or advice) which is provided on this website. The information on our website is provided on the basis that all persons accessing the site undertake responsibility for assessing the relevance and accuracy of its content. No responsibility is taken for any information or services which may appear on any linked web sites. Hostgator.
.