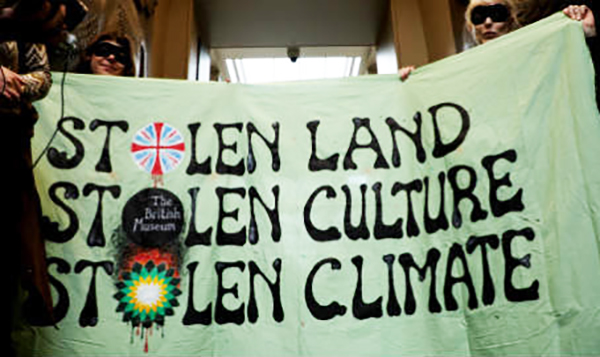 Demos bring practical challenges but they can be a chance for museums to engage with important issues.

Earlier this month, a crowd of around 100 people from the activist group Extinction Rebellion lay down “dead” in Kelvingrove Museum and Art Gallery in Glasgow, around the visiting skeleton of Dippy the diplodocus, to highlight the twin emergencies of climate change and mass extinction.

It came not long after a similar die-in at London’s Natural History Museum. Meanwhile, a single protestor – linked to the group but acting on his own behalf – was recently arrested after gluing himself to a statue of Darwin at the Oxford University Museum of Natural History.

These events mark the first time the high-profile group has chosen to target museums, but they are part of a growing trend for cultural heritage institutions to be used as sites of protest, either to draw public attention to a wider issue or to dissent against the actions of the institution itself.

Also this year, 13 protestors were arrested at the National Museum of Scotland in Edinburgh for trying to halt a gala dinner for oil industry executives; charges against them have just been dropped. And over the May bank holiday weekend, around 300 people attended a protest tour at the British Museum organised by anti-oil group, BP or Not BP, which has been campaigning against BP’s sponsorship of the museum since 2012. It was the largest crowd yet that the group has attracted.

As iconic architectural spaces that are mostly free to enter, museums have a lot to offer today’s media-savvy protestors. “The die-in was in our central hall, which is a grand space that you can look down on from the balconies and get the kind of shots that the media are interested in,” according to Ballantyne. “Museums could take it as a bit of a compliment: you’re a public building and you’re newsworthy.”

Protestors also have more meaningful reasons for choosing museums, however, as collections can be a powerful symbolic tool. At Kelvingrove, the campaigners drew attention to endangered animals in the museum’s taxidermy collection with slogans reading “Dippy’s extinct – they’ll be next”. Museum visitors were supportive of the die-in, breaking into a spontaneous round of applause when it finished.

In practical terms, museums face a challenge in balancing the rights of the protestors to freedom of speech and assembly with the safety of visitors, staff and collections. At Kelvingrove, the museum team did not receive advance warning, but knew through social media that something was planned.

“It was very orderly and there were no health and safety issues and no risk of damage to the collections, so our response was to let them get on with it,” says Ballantyne. “You need managers to respond calmly and with common sense. However, if people are unruly, our staff aren’t allowed to put hands on them and in that case we would have to call the police.”

This is a difficult judgement call. Coming down too heavily, particularly when campaigners are highlighting an issue the public feels strongly about, can backfire, says Danny Chivers, a member of BP or Not BP. The British Museum responded strongly when the group decided to stage a mock Viking funeral – complete with a longboat  – to coincide with the museum’s BP-sponsored Vikings exhibition in 2014.

Some members of the group were recognised and refused entry, while others had props and clothing confiscated. One protestor, whose name happened to be Thor, was wrongfully arrested by police and later released. “The headlines all said ‘Thor arrested on Viking protest’ – it got us even more press coverage,” says Chivers. “They made themselves look terrible, and it didn’t prevent the performance from happening. It just created a lot of unnecessary chaos and stress. Since then they’ve stepped back a bit.”

A spokeswoman from the British Museum says: “Our policy is to allow peaceful protest as long as there is no risk to visitors, staff or the collection. We have accommodated the group on several occasions since with no issue.”

Protests in museums are evolving to become more sophisticated in terms of the issues they raise. BP or not BP’s most recent interventions have drawn parallels between the imperialist, exploitative nature of fossil-fuel companies today and the historic colonialism represented in museum collections.

Its most recent protest was not just against oil sponsorship, but against what the group feels is the British Museum’s reluctance to address repatriation; the event was led by Rodney Kelly, a member of the aboriginal Gweagal community who has led a long-running campaign for the return of ancestral artefacts from the British Museum and other UK collections.

The British Museum’s spokeswoman says: “The museum met with Rodney on the Tuesday prior to the protest to discuss his request, we had a very positive discussion about future collaboration.”

Chivers says museums should engage with the issues campaigners are trying to raise, rather than ignoring them or becoming defensive: “It’s not that you have to have a meeting with everyone who comes into the museum with a placard, but you have to ask: are the issues being raised real issues that people care about?”

He agrees with Ballantyne that museums should take protest as a good sign. “Museums matter. It wouldn’t be such a concern to us if they didn’t have such an influence.”