You are here: Home » Articles filed under: 'News' » Article: 'Landmark Agreement with China'

Australia’s largest museums organisation has signed a significant agreement with the Shanghai Museum of Science and Technology – and sealed it by donating a koala specimen aptly named “Victor”.

Museum Victoria CEO, Dr J Patrick Greene, signed the Memorandum of Understanding on 28 March in Shanghai with his Chinese counterparts, as they await opening of a new $400 million Natural Science Museum.

Dr Greene said: “Australia and China’s collaboration in the cultural sphere is growing rapidly, and Museum Victoria is proud to be part of this with a formalised relationship with one of China’s largest natural science museums.”

“We look forward to working with colleagues in Shanghai as they embark upon the ambitious project to build a new museum. At the same time, Museum Victoria is experiencing rapid growth in the number of visitors from China attracted to Melbourne Museum, the Immigration Museum and Scienceworks. I am sure both organisations have much to learn and share from our agreement.”

The ongoing agreement enables Museum Victoria and the Shanghai Museum of Science and Technology to work together on a wide range of projects – from exhibition development to sharing technical and curatorial skills and knowledge. Staff exchanges between China and Australia are expected to be the first step in cementing this new long-term relationship.

At the signing ceremony in Shanghai, Dr Greene and Museums Board of Victoria member Wilkin Fon presented a mounted koala specimen to their Chinese colleagues. Originally from Warrandyte State Park, the koala had been found dead on a roadside – the likely victim of a passing vehicle. “Victor”, as he became known by museum preparators in Melbourne, is destined for display in the new Natural Science Museum. 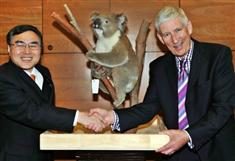 Professor Wang of the Shanghai Museum of Technolgy and Dr Patrick Greene of Museum Victoria with Victor the koala Image: J Zha Source: Mr J Zha, Labor Newspaper, Shanghai
Positions Vacant » View All
» Exhibition Experience Developer – Te Papa
» Operations & Science Centre Mgr – Otago Museum
Latest News » View All
MA Museums Change Lives Awards
2021 Shortlist announced Read more.
Tattooing as a cultural phenomenon & art
form – historic & current challenges Read more.
Oriel College’s retain & explain plaque for
Cecil Rhodes statue – what’s balance? Read more.
City of London to retain & explain statues
- Guildhall’s slave trader policy reversal Read more.
What to do if you find fossils or artefacts
A history worth protecting Read more.
Top +
Council of Australasian Museum Directors, c/o Ms Daryl Karp, Museum of Australian Democracy at Old Parliament House PO Box 3934 Manuka, Australian Capital Territory 2603 Australia, © CAMD 2021
Copyright: All information and resources provided on this website remain the copyright of the Council of Australasian Museum Directors. Permission is granted for viewing and downloading for personal and not for profit purposes. Those wishing to reproduce any materials for commercial, educational or other uses are requested to contact us.
Disclaimer: The content of this website is provided for information purposes only and is not intended as a substitute for professional advice. No claim is made as to the accuracy or authenticity of the content of the website. The Council of Australasian Museum Directors does not accept any liability to any person for the information or advice (or the use of such information or advice) which is provided on this website. The information on our website is provided on the basis that all persons accessing the site undertake responsibility for assessing the relevance and accuracy of its content. No responsibility is taken for any information or services which may appear on any linked web sites. Hostgator.
.